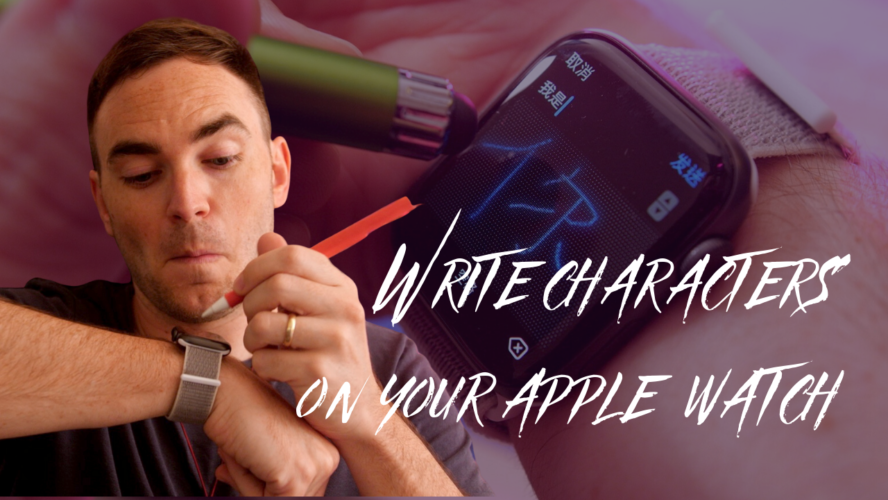 Why write characters on your wrist?

If you own an Apple watch, and you’re learning a character-based language like Chinese or Japanese, the built-in handwriting feature on the Apple Watch is pretty great. In this blog, we’ll learn how to set it up and get started.

Now, why might you want to use such a small display to handwrite characters? Well, sometimes, dictation isn’t feasible, like on public transport or in a noisy environment. As a learner, it’s also an excellent way to practice all the hundreds of characters you’ve learned using Skritter. Also, it’s 2020 and people are sending messages from their wrist – get used to it.

First, you need to install a keyboard language on your iOS device. To do this head to Settings>General>Keyboard>Keyboards>Add New Keyboard... Then pick your language from the options. In this case, we’re gonna select Chinese, Simplified and then pick QWERTY. However, the same works for Japanese or any other language.

Once the keyboard is added, you can open Apple Messages on your Apple Watch. Open a chat, then force touch (3D touch) the screen to get some new options. Hit Choose Language, and pick the one you want.

Now we can begin writing Chinese. Tap on the blue/green button with the A(+hand) icon. One’s finger is not quite as precise for the small screen, so if you don’t mind looking like a fool, pick up a cheap stylus to get practicing. FYI, the Apple Pencil won’t work, (the thumbnail image was just used for clickbait purposes).

Autocomplete: Write a character, and then rotate the digital crown to autocomplete the word. For example, write 谢 and then move the crown to get a list of options including 谢谢.

Fix a mistake: tap on any character and then scroll the crown to get other possibilities. Hit the X button to delete it if no suggestions appear.

Punctuation: This is hit or miss, but a small circle or dot will do a Chinese period。A comma works the same as in English, and other Chinese punctuation marks are possible but it’s hard to always get what you want. If you wanna learn more about Chinese punctuation, check out this post.

Scroll through a sentence: Just swipe around at the top of the screen to move around a line, then tap to make changes.

Access smart replies: Come out of the scratchpad, and scroll down below the 4 buttons. You will see a range of quick replies. Further down the list, you will see some Chinese options like 马上到， 好的，or 麻烦你了。 It’s possible to change smart replies using the watch app under Message settings.

If you have an Apple Watch, have a go writing some Chinese, and see if you can perfect the art. It certainly takes a bit of practice, and a cheap stylus gets the best results. Let us know in the comments on YouTube if you find any other tips or tricks that we missed.