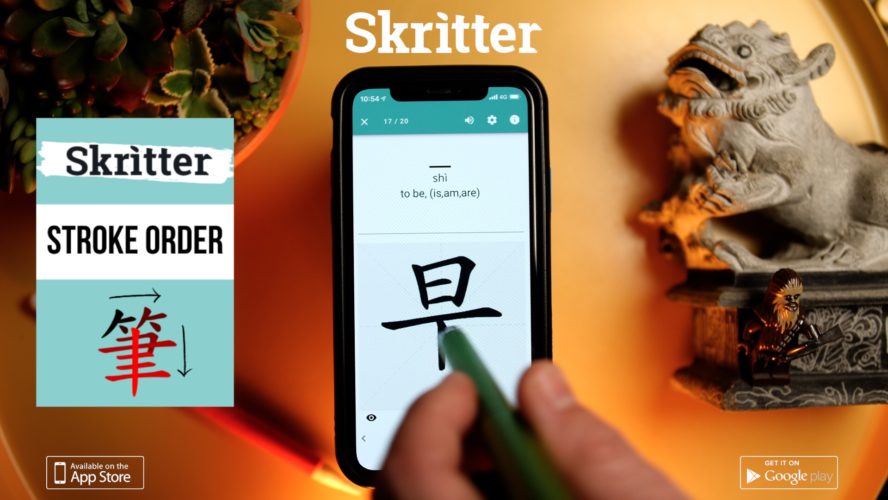 We have made a free deck on the Skritter app that has been designed for complete beginners, and works through the 8 rules in a logical fashion, using characters from the top 100 most common list of words.

We strongly recommend you download the free app, and study along with us.

Why is Stroke Order Important?

Now, we’ve already made videos on the importance of stroke order which you can watch here, but here are some of the top reasons why stroke order is important for a learner of Chinese.

Download the app on iOS or Android to learn these rules.

In general, Chinese characters are written from top to bottom, left to right. This means that you normally begin in the very top left corner, and work your way down to the bottom right corner in this direction (diagonal line motion).show demo character on screen.

Opening section 1 of the app, we have 3 characters that demonstrate this rule. You write from top to bottom.

Chinese is made up of building blocks called components. In general, we write one component before moving onto the next one, so in this section, we have two characters like this. First complete the left part, and then the right, and remember, its top to bottom, and then left to right.

For this rule, we write the left sloping stroke first.

Each stroke in Chinese calligraphy has a specific name, and if you’re interested in learning about that, watch the video here and then this one specifically about the rule, 先撇后捺 (Related video).

5. Framing strokes before box contents, but closing stroke last （AKA framing before containing)

The most basic framing component is 囗 wéi which is an enclosure. First, we do a top to bottom stroke (rule 1), then draw a right angle, and finally, we finish it off by closing out the bottom. The same stroke order applies to the character 口 kǒu which means mouth but is technically not a framing component.

The character for day (日) follows a similar pattern, with the final stroke closing it all off.

With this character (因）, there is a big component（大）inside of this framing box. Since you do the closing stroke last, you actually first complete the enclosed component in the box before sealing it up.

What this means is that if there is a vertical stroke that cuts through the character, you generally write it last. So the character for 中 zhōng gets skewered right at the end. For 半 bàn we go top to bottom, left to right, and finish off with a skewering final stroke.

These 3 characters all have one thing in common. They have a dot component in them. This is typically written last.

Okay, that was quite a lot to remember but fear not. Skritter teaches stroke order without you even needing to think about it.

Now that you know the basic principles, you will be able to write most characters, and if you get something wrong, Skritter will automatically show you the right way to do it. If you want to study stroke order in more detail, you can tap on the teaching button or long-press on the screen to show the next stroke. If you keep getting it wrong, we will actually prompt the correct one. over time, you will learn all these rules implicitly, and since Skritter users SRS, we will show the ones you get wrong more often to ensure you don’t forget them.

In the final section of this free deck, we have put together a list of common characters that have various combinations of these stroke order rules.

We hope you enjoyed this lesson on Chinese stroke order, and we encourage you try out the deck for yourself using the links below.