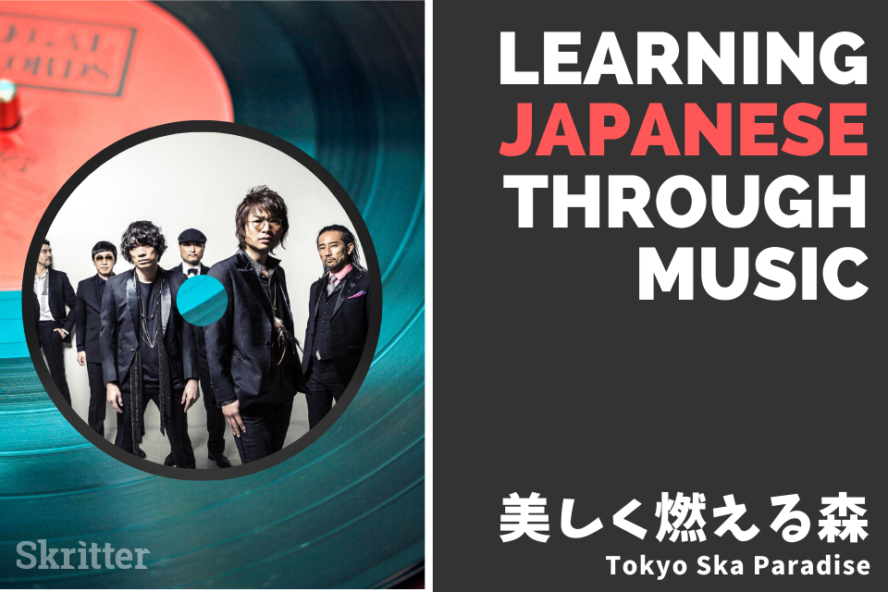 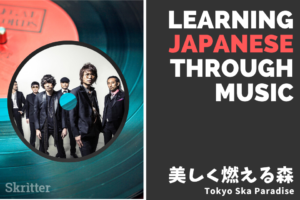 Often times the best study tactic is the one you enjoy most. Music is an incredible way to study a language without feeling like you’re “studying”, and songs have the tendency to get stuck in people’s heads (and repetition is key to learning things). Not to mention it certainly doesn’t feel like flashcards or a drill. It’s also a great way observe and absorb culture which is always essential, but can be particularly important for some languages like Japanese. It’s not surprising some people who become proficient in a second language like English for example, sometimes say they owe a lot to either music or television, two things people as a whole are generally interested in and can offer great ways of learning.  If you want more tips on how to make studying more efficient and fun, check out this post: Study Smart, Not Hard

This series of posts covers Japanese songs, along with their lyrics, and translations so you can make sure you learn every word.

When translating Japanese, and especially for things like subtitles which are timed, there are times when the English translation sounds more natural when the line order is switched or combined, based on how the lines are broken apart in the lyrics in Japanese and the word order, since for instance what is sometimes said at the end of the sentence would be the beginning of what’s said in the English sentence. There are also times where something doesn’t match nuance, and so what’s said is actually somewhat changed. However when going the interpretation route versus direct translation route, the translation won’t always follow the flow, and also roughly match the English translation line by line. Since this is a song, and the musical emotion is timed with the Japanese lyrics, I’ve kept it as close to the Japanese flow as possible as far as what line corresponds to the English translation. Needless to say this might sound unnatural in English or a bit like Yoda in places, but butcher the song’s flow I want not!

Flying with bewilderment, a single brilliant butterfly
I stared at you silently as you lead my sadness
Without an exit, entrance to a forest

Coiled around, in sadness
with a sense of discomfort, I lost my way.

Open up the sheet music, and in an unskilled manner, oh
a piano is being played, and from it I can hear
the voice of it calling out a departure: “Goodbye.”

Waning– the moonlit night
And to you who stares at changing numbers,
light the fire– the middle of the forest
The butterfly who can no longer fly, shall I stare at you in intoxication?

Without heading back, without saying a word
a night that waits for the end, and this beautiful forest

Just one, I had seen,
stardust in the night sky, I aim at
blindfolded– the middle of the forest
on a trip with no return, shall I depart and forget you?

Don’t fret over times you can’t stop, burn it in a blaze until it’s exhausted.

The songs lyrics may sound a bit morbid, but it’s actually a sad love song.

・The song starts off with the main character viewing a butterfly which is flying in confusion at the entrance of a forest
・The butterfly can be a metaphor for a person
・The forest can be a metaphor for the concept of a setting where love can grow
・A voice is heard from the piano itself, notice how 聞こえる is used opposed to 聴こえる. The piano could be thought of as the same entity as the butterfly, and it’s saying it’s goodbyes.
・かけてゆく is used without kanji, which could be interpreted as either 欠けて (like the waning of a moon), or 駆けて (gallop/run), which could be a reference to time passing quickly
・The reference to “staring at changing numbers” (変わり行く数字) could be thought of as time on a clock, or dates on a calendar, another reference to time passing
・Lighting the fire could be thought of as sparking the flames of love, notice how at this point in the song it uses 君, instead of the 蝶 or the ピアノ which had previously been personified. Light the fire (火をつけて）could apply to 君に or 森の中, for instance lighting a flame in one’s heart, or lighting a flame in the “center of the forest”, where 美しく燃える森 (beautiful burning forest) could be a metaphor for the love between the main character and “君”.
・The butterfly who can no longer fly could be thought of as the main character who catches it, and watching it in intoxication is like the intrigue/excitement of having caught the butterfly
・The “blindfolded” (目隠しで) could be a reference to how “love is blind”
・Time you can’t stop (止められない時) could be another reference to the passing of time
・The last line could suggest to not worry about things you can’t change (like an inevitable goodbye), and to let it burn brightly until it runs out