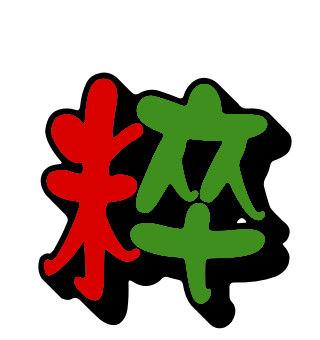 This is a phonetic-semantic compound, so one part represents meaning (the left in this case, which is very common) and one part represents the sound (the right, also common). On the left, there’s 米, which is also the radical. Think of pure rice, free from chaff, pebbles or whatever else might make it impure. The right part is 卒, which is less common on its own in modern Chinese, but the original meaning is soldier or servant.

Some common word words with 粹:

I’m not sure why students get this character wrong so often, perhaps not having done the above analysis is part of the explanation. There are few other similar characters to mix it up with, only 醉 (zuì) “drunk” is common. If you have a problem remembering this character, I suggest building a mnemonic based on “rice”, “soldier” and “pure”. For example, picture a group of soldiers carefully checking their daily ration of rice, removing anything that makes it impure. A little bit like drug dealers checking the purity of their goods in a film.

Yet again, this is a phonetic-semantic compound; they really are very common! The breakdown of this character is not perfectly clear-cut, but the simplest to remember is probably that it’s 饣(飠) “food” plus 布 “cloth”. The left part is pronounced shí, so only the tone is different; 布 is not hard to relate to decorations.

Some common word words with 饰/飾:

I can think of two reasons why this character is hard. First, there are so many characters that are pronounce shì that it might just be a matter of not remembering which character it is. Second, it’s not the norm that the right part is not the phonetic component. This can potentially be extra confusing because it’s similar to another character that are also pronounced shì, namely 市. Creating a mnemonic with food and cloth should be fine, such as someone wearing cooked fish, boiled vegetable and grilled meat as adornments instead of jewellery.
Practise writing the character using the scratchpad!

As were the previous two characters, this is also a phonetic-semantic compound consisting of 阝 and 夌. The left part is the semantic component and requires some explanation. In this compact form, it can actually represent two different characters. If it’s on the left of the character, as in this case, it means “mound”; if it’s on the right of the character as in 都 for example, it means “city”. The right part is not used in modern Chinese, but used to mean “surpass” and is also pronounced líng, so no change from the full character.

陵 is common in many place names; here are some examples (except the first):

There are several reasons why this character causes confusion. First, the flexible nature of the radical that changes meaning depending on where it is caused at least me a lot of confusion before I figured out how it worked. Second, there are several other common phonetic components that can be pronounced the same way, such as 令, making it hard to choose the right one. 夌 is actually not that common. For me though, it’s simple because my surname is 凌, so I’ve written that component many, many times!
Practise writing the character using the scratchpad!