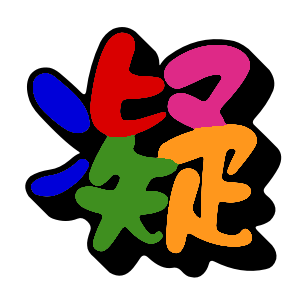 This is a phonetic-semantic compound, which means that one part (the left) represents meaning and one part represent the sound (the right). We have 半 “half” and 反 “opposite; turn over” (pronounced fǎn, so the final is the the same).

Some common word words with 叛:

I’m a bit perplexed as to why this character is on our list of most difficult characters (remember, this list is based on what users actually get wrong, not my personal opinion). Both the component characters are really common. I would use a simple mnemonic for this, involving cutting a person in half and turning him over (to the other side). Do you find this character difficult? Please let me know why!

14. 沈 (chén/Shěn) “to sink/(a surname)” (frequency rank: ~1600)This character has two pronunciations. First, it’s a common surname Shěn. Second, it’s a variation of the character 沉, which means “to sink” and is pronounced chén. It’s a left-right compound which is allegedly a semantic-phonetic component, but the pronunciation has changed quite a bit (the right part is read yín) and mean “to leave; go out”.
There are no common words with this character. For the chén reading, you should write 沉 instead, so I’m not going to talk about those words here (there are many). Apart from people’s names, the character also appears in the capital city of Liaoning (辽宁省) in north-eastern China, which is called 沈阳 (Shěnyáng).
This character is probably difficult because students (including myself) mix it up with 沉. This is okay to do, people will understand what you write since it’s a variant character, but it’s best to keep them separate. For practical purposes, this character is only used for the names (personal and place names).
Practise writing the character using the scratchpad!

15.  凝 (níng) “to congeal; fix” (frequency rank: ~1500)This is also a phonetic-semantic compound (they really are very common). The left part is “ice” bīng in its radical form, the right part is 疑 yí “to doubt”, which is in itself a tricky character. As you can see, though, the pronunciation has shifted quite a bit and is no longer of much help (same tone and both contains a similar vowel sound; better than nothing I guess!).

Here are some common words with 凝:

This character is of course difficult because the right part is horribly difficult to remember. I actually mentioned that as one of the characters I found hardest to learn. If you already know that character, it’s easy to come up with mnemonics involving doubt and freezing, unable to move or make a decision. That doesn’t really help much if it’s actually 疑 you’re having a problem with, though, so let’s look at that.

疑 contains the components 匕 “knife; spoon”, 矢 “arrow”, 疋 “bolt of cloth” and a form of 予, which means “I; me ” in classical Chinese. See if you can come up with a picture involving “to doubt” and a knife/spoon (sort of like a spork?), an arrow, a bolt of cloth and an ancient version of yourself!