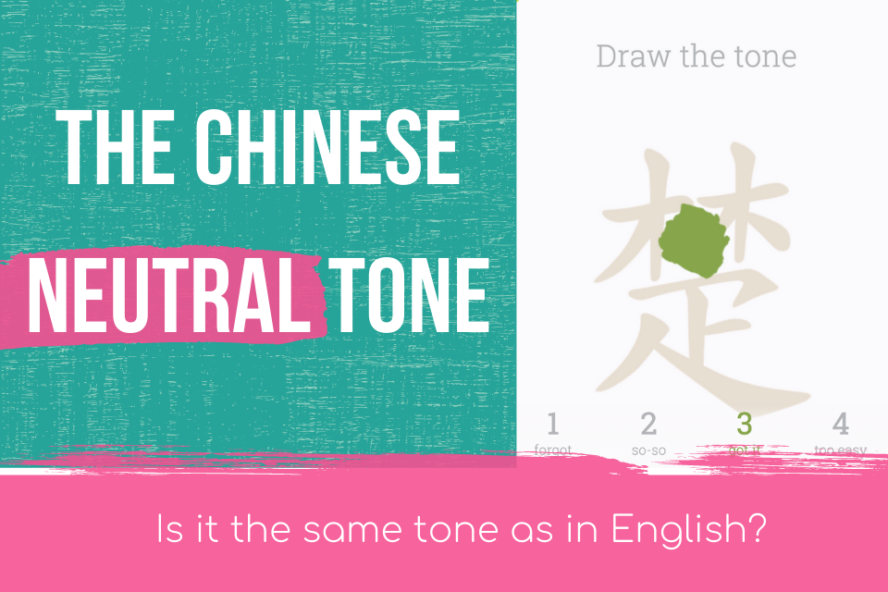 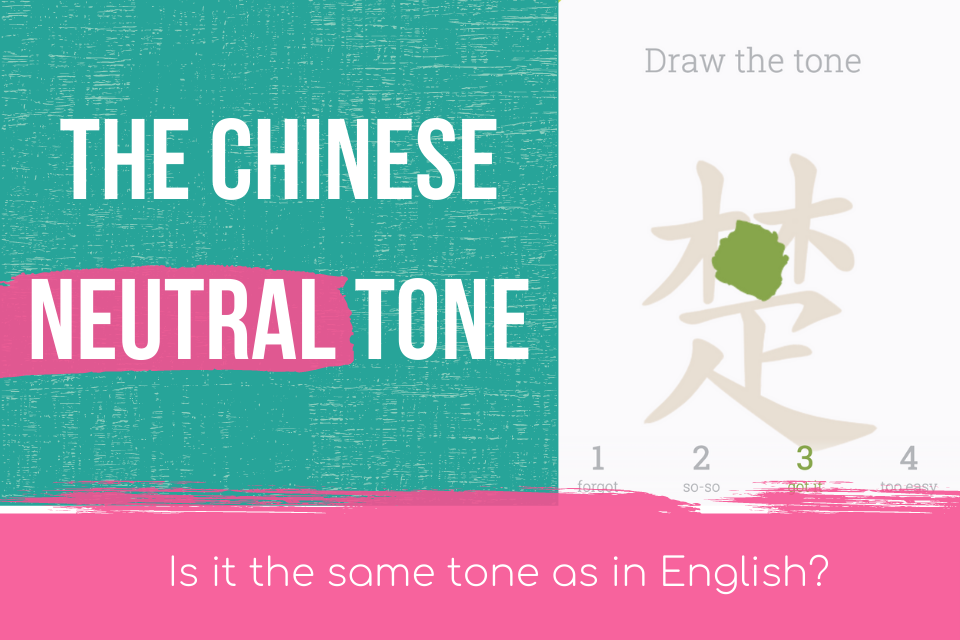 Intro:  Some basic information about the neutral tone

While the Chinese Neutral Tone may seem simple at first, this tone often causes great confusion for most learners of Mandarin.  In the beginning, many westerners might assume that it is similar to English and other Western Languages—that it is an easy tone to learn.

However, for many learners the Chinese Neutral tone is difficult.  This is because their ear isn’t trained for it and we actually use a lot of tonalities when speaking Western Languages [assuming that this is true of course].  Here are some common questions about the neutral tone: 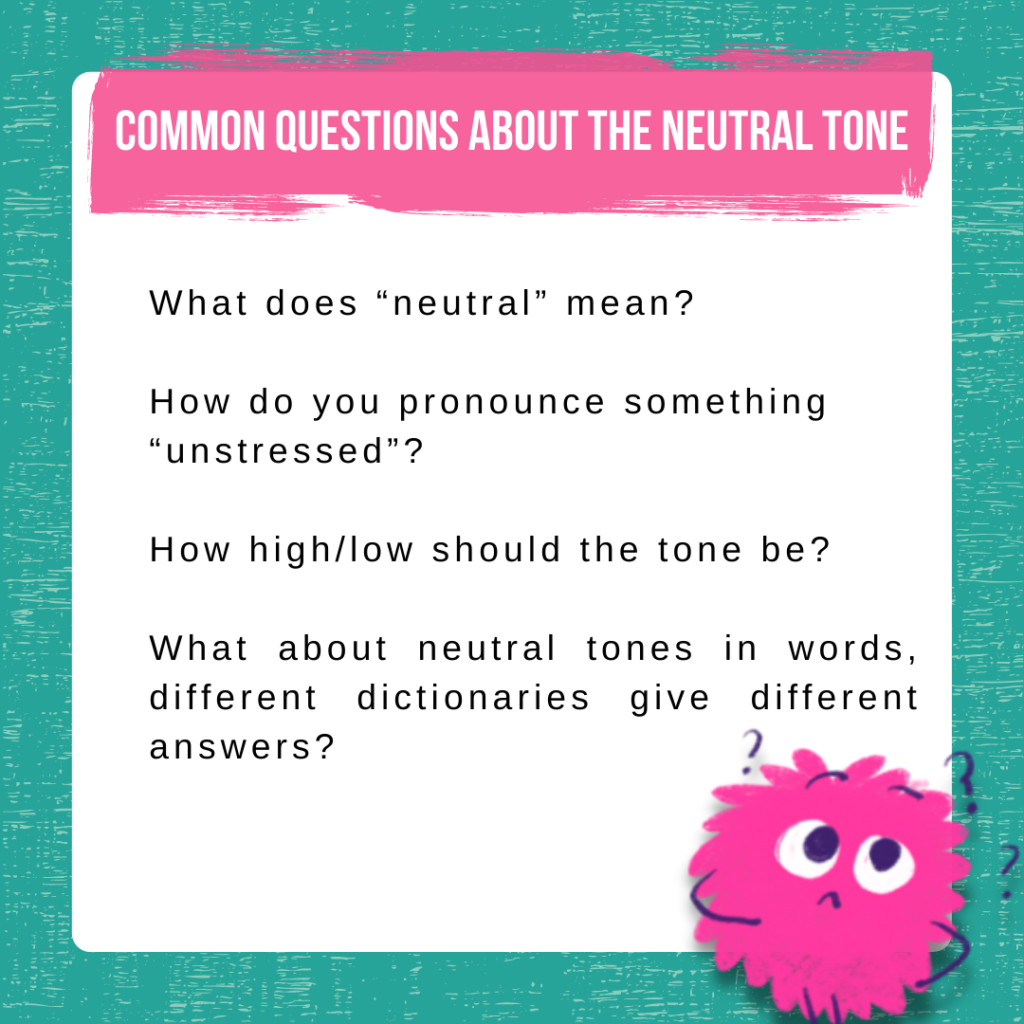 In this post, I’m going to answer these questions and a few others. This is the kind of information which should be in any good textbook, but typically isn’t.

How do you write the neutral tone?

In case you’ve just started learning Chinese, the neutral tone can be written in several ways: 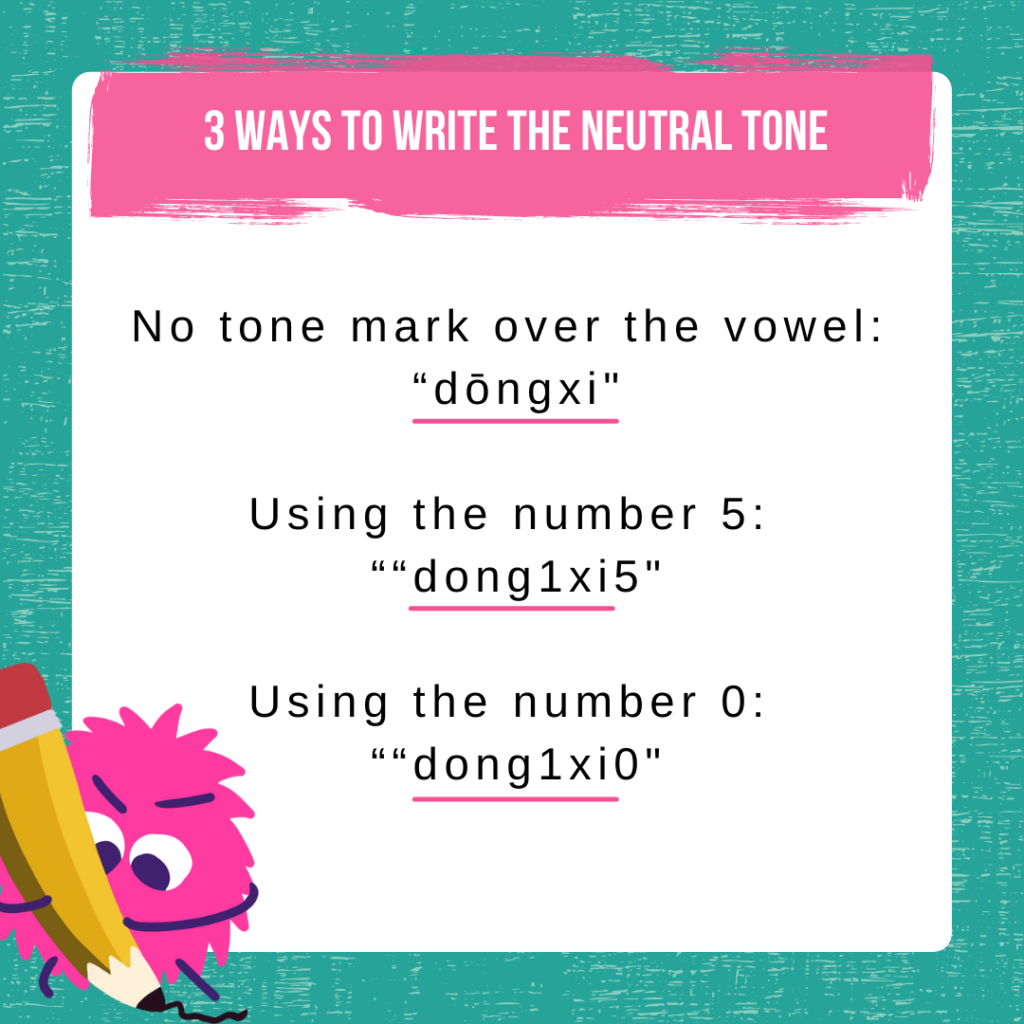 These all mean the same thing.  They are just different ways of spelling.

Note:  The neutral tone usually occurs in the second syllable of a two-syllable word or between two stressed syllables or in phrases. It never appears at the beginning of a word.

What does “neutral” mean? 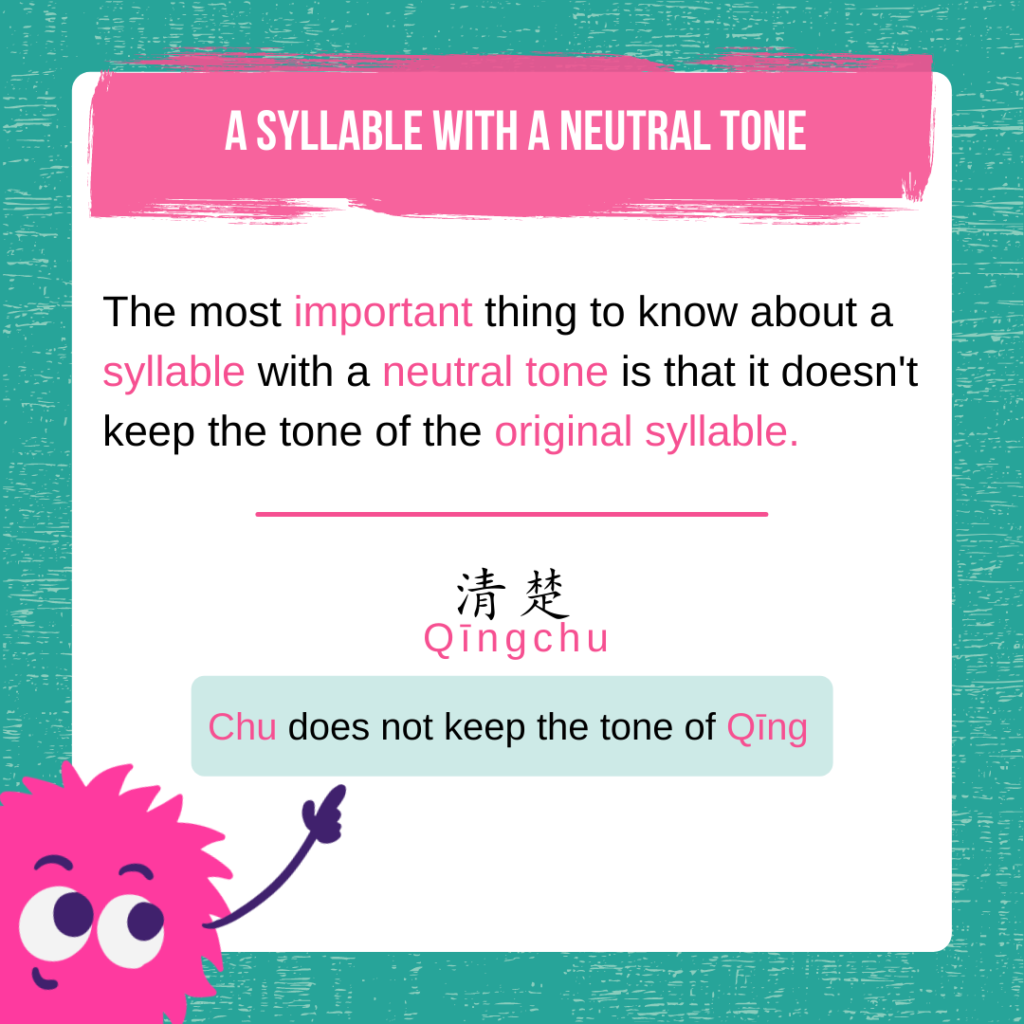 The neutral tone is called 轻声/輕聲 (qīngshēng) in Chinese, which literally means “light tone”.  The most important thing to know about a syllable with a neutral tone is that it doesn’t keep the tone of the original syllable.  Instead, the tone comes from somewhere else. The syllable of a neutral tone is unstressed, but more about this later, let’s look at the tone first. 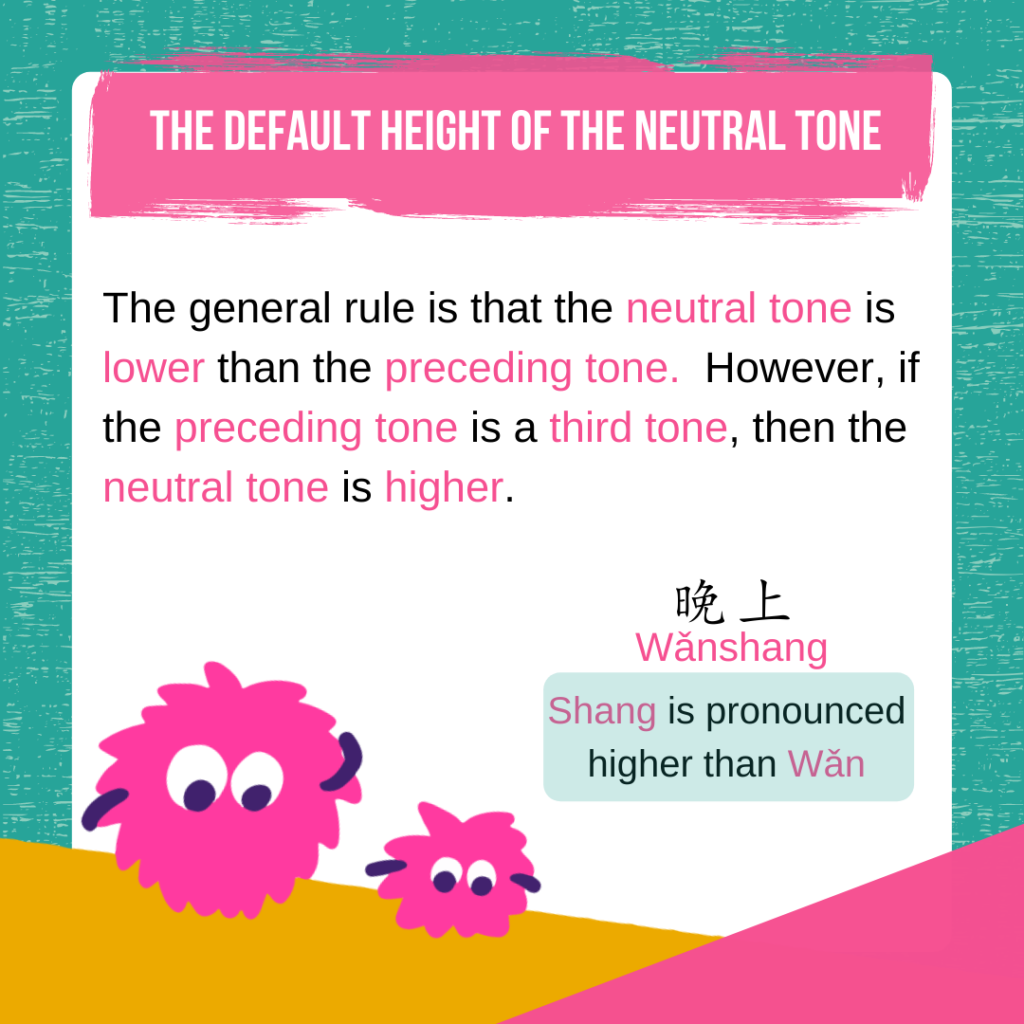 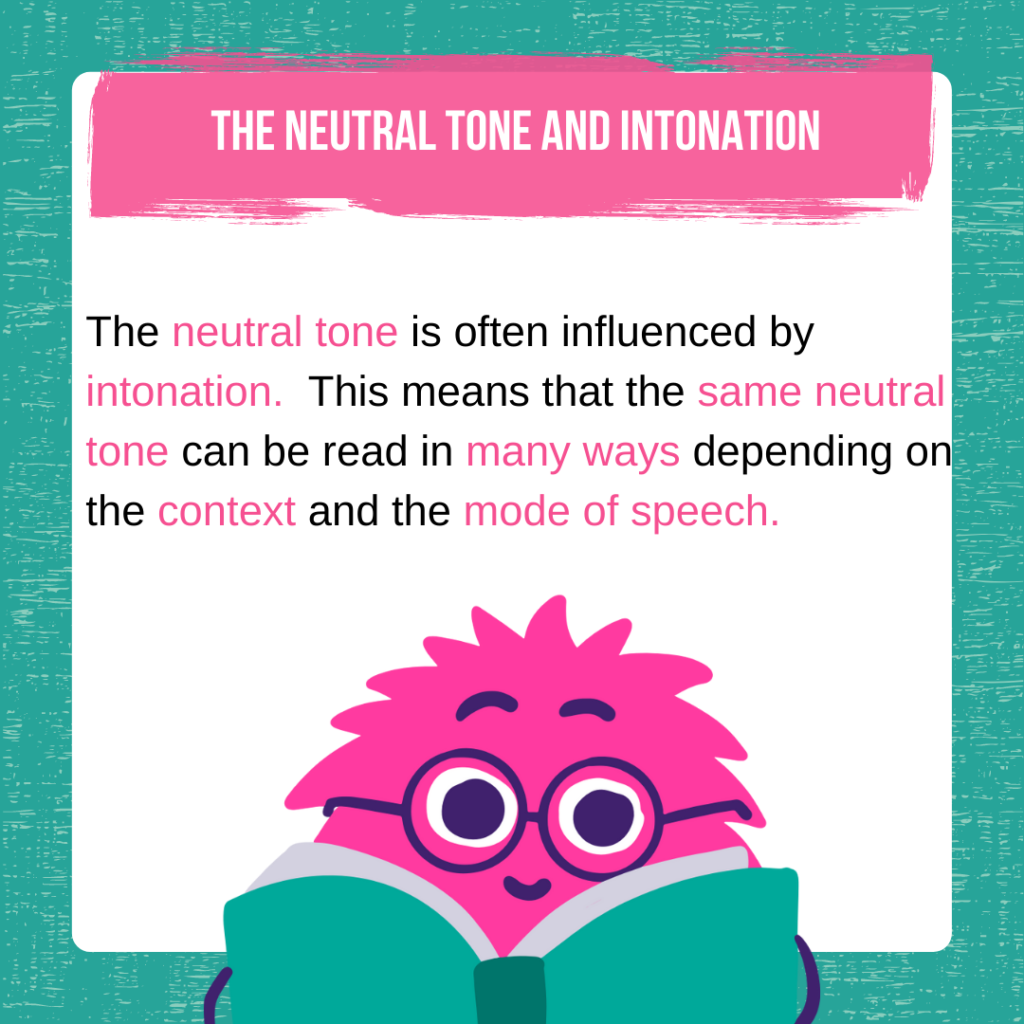 Second, the neutral tone is often influenced by intonation. This means that the same neutral tone can be read in many different ways depending on the context and the mode of speech. Intonation in general doesn’t change the pitch contour (the shape of the tone) in Mandarin, but it does shift the entire tone range up or down, more or less in the same way as in English (i.e. up for questions, down for statements). The neutral tone is much less constrained and has no definite shape.

What does “unstressed” mean?

This should be relatively easy for native speakers of English. If we take a word like “English”, the stress is on the first syllable, the second is unstressed. The same is true for many Chinese words and the neutral tone appears on these unstressed syllables. 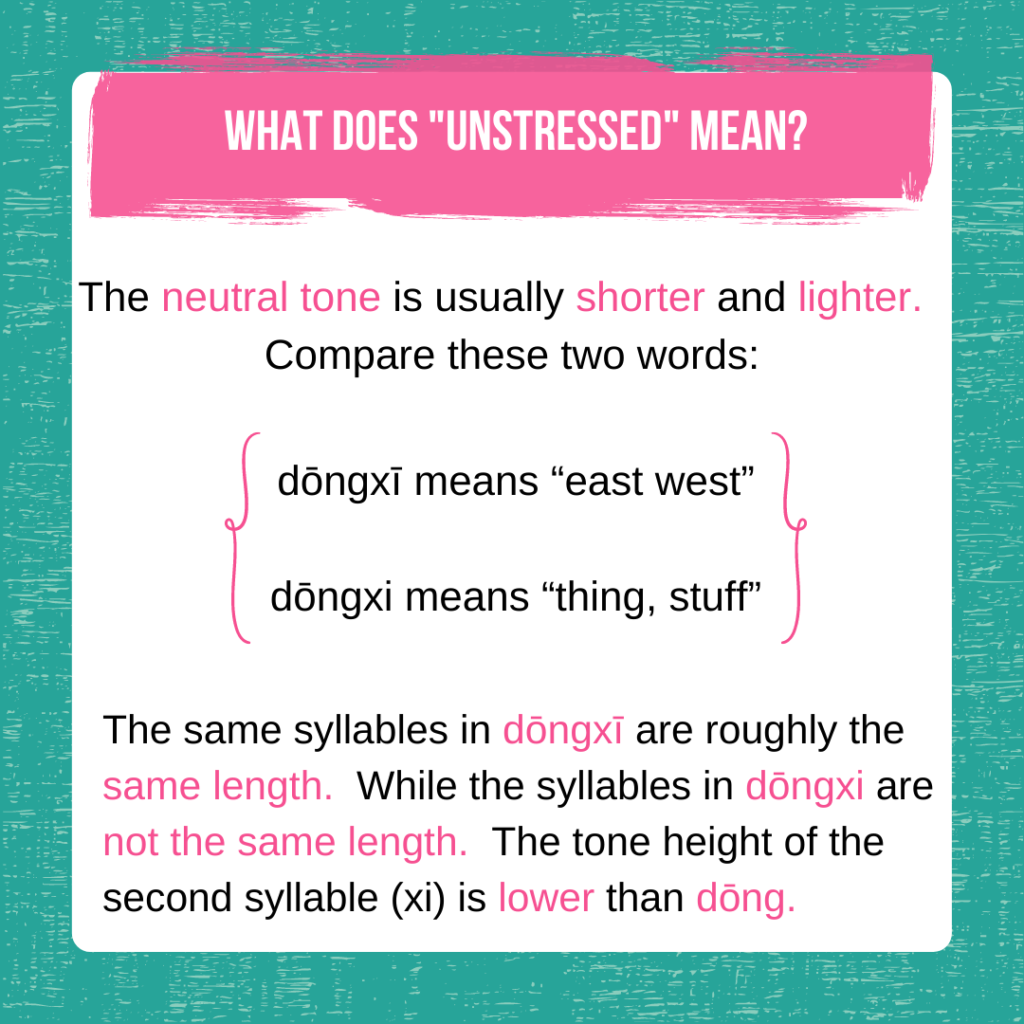 Unstressed syllables are also reduced, which means that the pronunciation often changes. This is fairly complicated and I won’t go into detail here, just be aware of it. This happens in English as well, so when we say a word like “control”, we don’t pronounce the first syllable like we do in “continent”, instead, the syllable is reduced and the vowel sounds more like “e” in “the”.

As mentioned above, I don’t think the exact numbers matter much, but since I know someone will ask about it if I don’t write them, here we go (the scale used is 1-5 where 1 is low and 5 high): 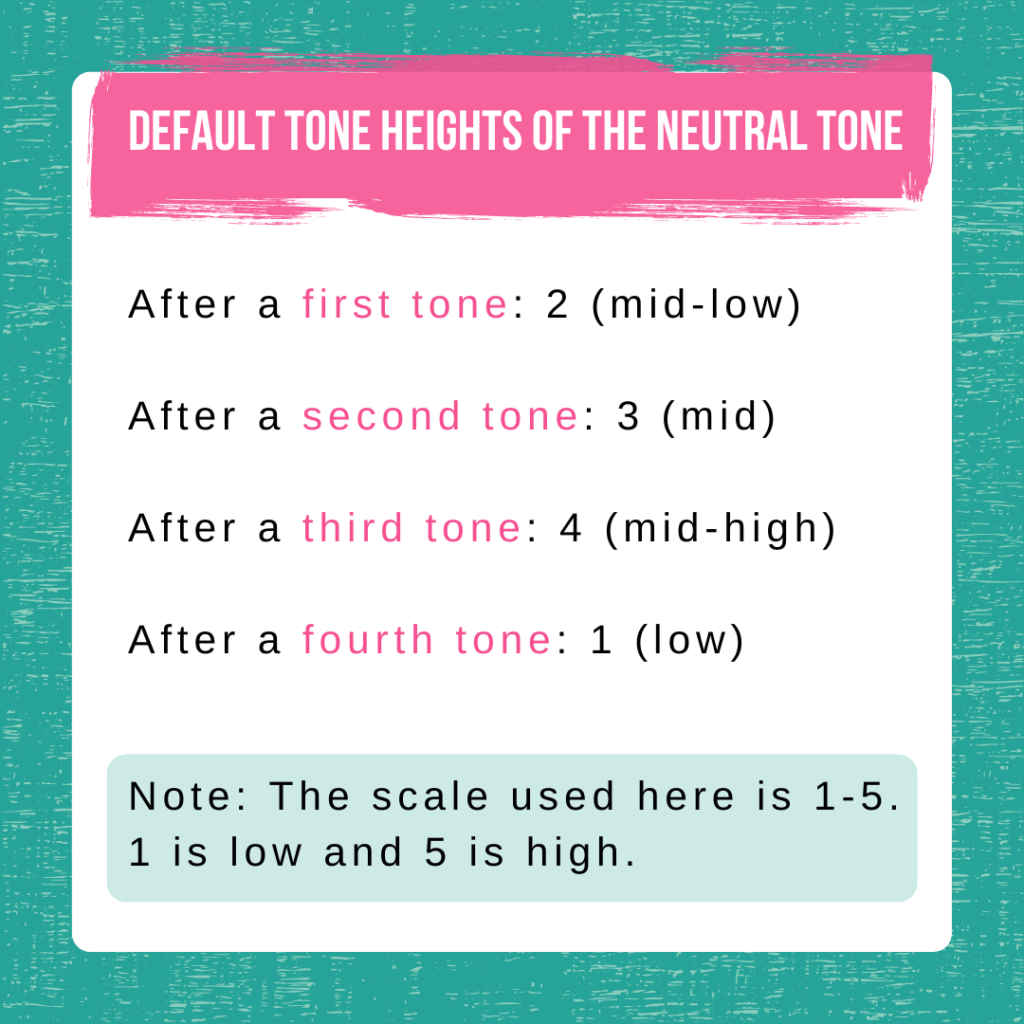 Recently, I’ve started helping out with Chinese support and a lot of questions/issues are about neutral tones. The problem is that there is a large number of words that can be pronounced in more than one way, or written in more than one way. Should父亲/父親 and 母亲/母親 be “mǔqin” and “fùqin” or “mǔqīn” and “fùqīn”?

You have two options here. Either you spend ten minutes trying to figure out which one is the “correct” way of saying it, or you realise that a language such as Mandarin is huge, diverse and organic and that there might be more than one way of pronouncing the word.

In other words, don’t worry too much.  It’s easy to understand regardless of which version you choose and it’s not hard to adapt your pronunciation later if you want to.  In general, the Beijing dialect contains many neutral tones and reductions compared with e.g. Taiwanese Mandarin.

On Skritter, we try to use the most standard version of the pronunciation, but this doesn’t mean that everything else is wrong. As I said, in many cases, both are perfectly acceptable. If you find a problem with a neutral tone on Skritter, please report it so we can improve!

Conclusion:  Remember these two rules about the neutral tone 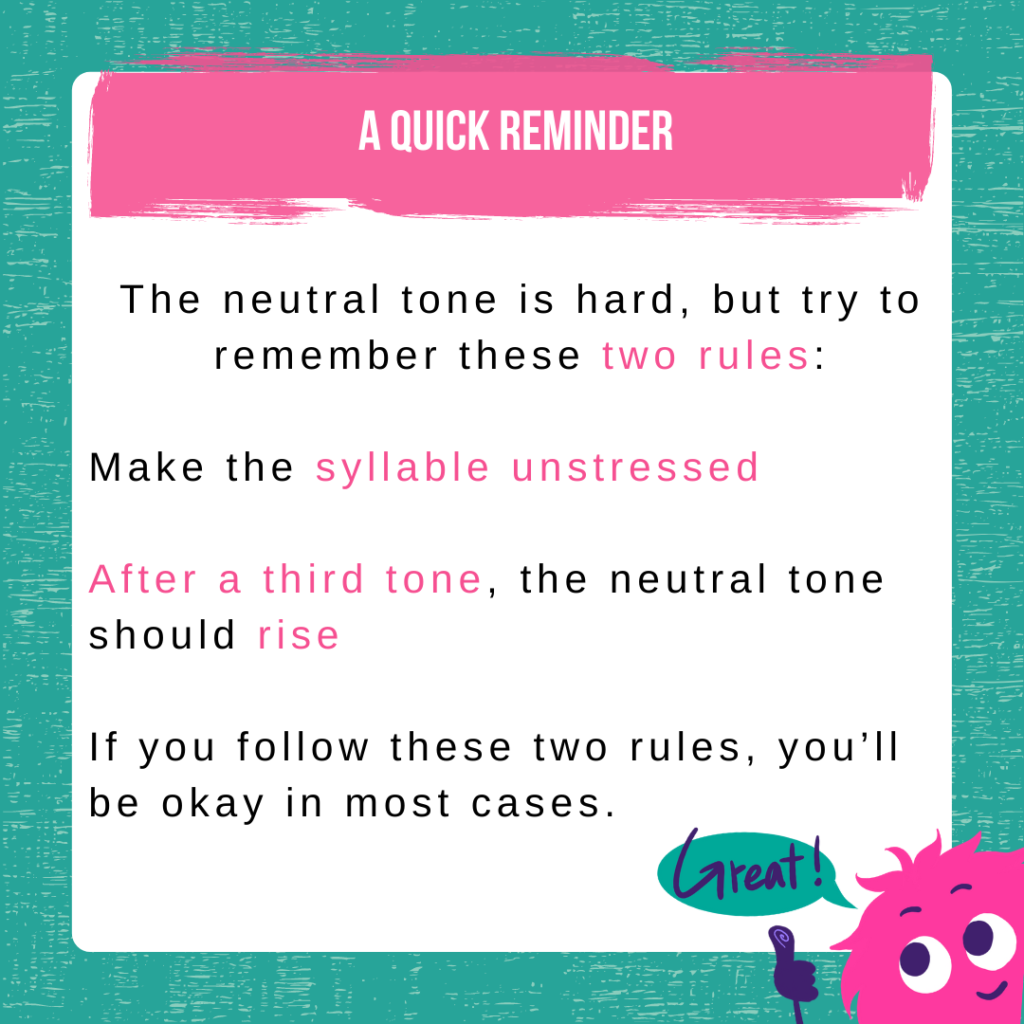 If you want to learn more about the neutral tone, check out this post.  You also may be interested in this post about tone changes in Mandarin.

New users, start your 7-day free trial today and save 10% on your first subscription with the code INKREN.  To claim this offer you must sign up on our website.