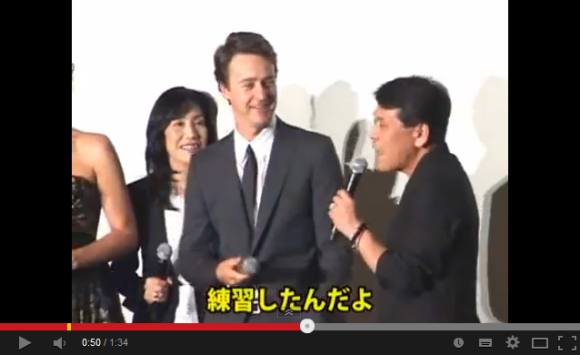 I’m probably not the only one who finds it interesting to see other non-natives speaking foreign languages, in this case Japanese. Here is a list of videos I’ve compiled of mostly celebrities speaking Japanese:

Steven Seagal’s Japanese is good, in fact, the audience laughs with him from time to time in surprise when he uses natural-sounding Japanese. He moved to Japan around 20 to study Aikido and teach English, where he eventually opened a dojo teaching Aikido, and has spent about 10-15 years living in Japan on and off.

Edward Norton’s Japanese is impressive considering he studied it over 10 years ago and likely hasn’t spent much time since then. He studied Japanese at Yale before moving to Osaka to consult for his grandfather’s company.

Mike Shinoda doesn’t speak the language, though is half Japanese himself. He did take the time out to practice and read a speech in Japanese at a show in Tokyo, which I think is cool.

David Ury is an Andy Kaufman-esq actor and comedian who has appeared in a number of different roles, most notably AMC’s “Breaking Bad”. He’s fluent in Japanese and makes YouTube videos where he pretends to be “Ken Tanaka”, a long lost brother of David Ury who was adopted by Japanese parents and raised in Japan. He also works as a Japanese-English translation specialist for various manga.

Arguable one of the best guitar players in the world, Marty speaks amazing Japanese and even has videos on YouTube describing how he did it,

Van Halen’s ex lead singer David Lee Roth decided to buy an apartment in Tokyo in 2012 and takes private Japanese lessons. He does have a thick accent in his pronunciation, but that’s probably partially due to how he’s trying to speak as fast as he can, and that he hasn’t studied that long.

In addition to a number of other awesome films, Bill Murray starred in “Lost in translation”, where he played an actor filming a commercial for a Japanese company. Here is a behind the scenes video of him on set, though the Japanese he uses in this video doesn’t come from what he recently learned, and instead from a book he bought a long time ago called “making out in Japanese”, which he doesn’t know why he bought.