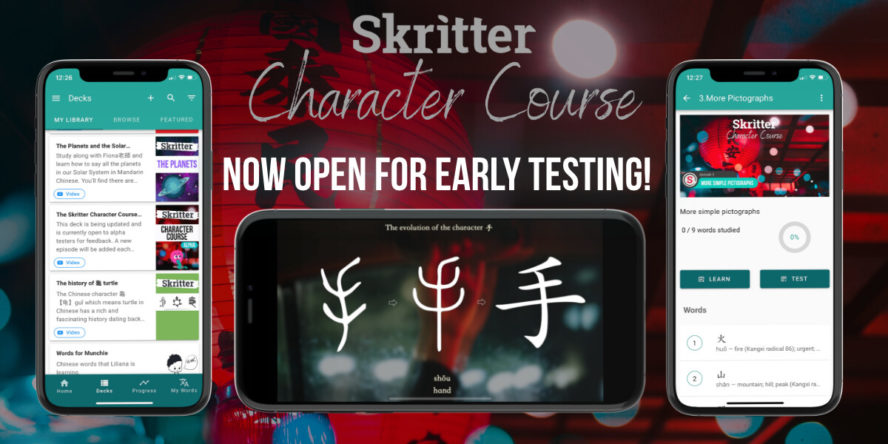 Most flashcard apps are good at helping you review, using algorithms to help you optimize your efforts to remember what you have already learnt. Few flashcard apps do well when it comes to learning new things in the first place, though. The result is that many students use mindless repetition to try to hammer in new characters and words. Spaced repetition is great for maintaining knowledge, but it’s not very good at encoding complex information in the first place.

One problem with simply repeating something over and over is that it doesn’t necessarily bring understanding, and research into learning in general shows that understanding has a big impact on memory. This is the difference between looking at a Chinese character and seeing a bunch of arbitrary strokes, and looking at the same character and seeing functional components. While you can memorize a jumble of strokes, it’s certainly harder than combining larger chunks that are combined in a meaningful way.

Most students are aware of the fact components can represent meaning in Chinese characters. For example, it should come as no surprise that the character 明 (míng) “bright” is composed of 日 (rì) “sun” and 月 (yuè) “moon”, and that both those components contribute to the meaning of the whole character (two bright objects being used to represent the concept of “bright”). If you weren’t aware of this, you would probably have figured it out soon!

Fewer students realize that combinations of two semantic (meaning) components like that are actually rare and that many components are not included because of what they mean at all. For example, in the character, 妈 (mǎ) “mother”, consisting of 女 (nǚ) “woman” and 马 (mǎ) “horse”, what does “horse” have to do with “mother”? Did the ancient Chinese regard mothers as female horses? No, they didn’t. Instead, the character 马 (mǎ) “horse” is included because of the way it’s pronounced, not because of what it means (except for the tone, it’s pronounced the same as 妈 (mǎ) “mother”. Without this kind of insight, it’s impossible to understand Chinese characters, which makes them harder to learn and remember.

The character course is now available in Skritter

As part of our ongoing effort to make Skritter the best possible app for learning Chinese vocabulary, we have created a character course that distills all the essential insights you need to make sense of Chinese characters and thereby make them easier to learn! Here’s the first episode, which introduces the course itself:

In 17 concise episodes (5-6 minutes), we teach you everything you need to know about characters, from very basic things like stroke order and pictographs, to more complex concepts like phono-semantic characters and character corruption. Here’s a list of all the episodes in the course:

The course is not finished yet, but we believe that we have come far enough to release the course for subscribed users. You can access the course by opening the Skritter app and looking for The Skritter Character Course among the featured decks.

This means that the course does not assume that you know anything at all about Chinese characters.

Finally, remember that the course is not yet finished. More episodes are on the way and we will publish one per week until we are done. We are also interested in hearing what you think about the course, so if you decide to check it out and have a comment or a question, make sure to pop over to the forum and let us know! In the meantime, welcome to the Skritter Character Course, and good luck with your studies!