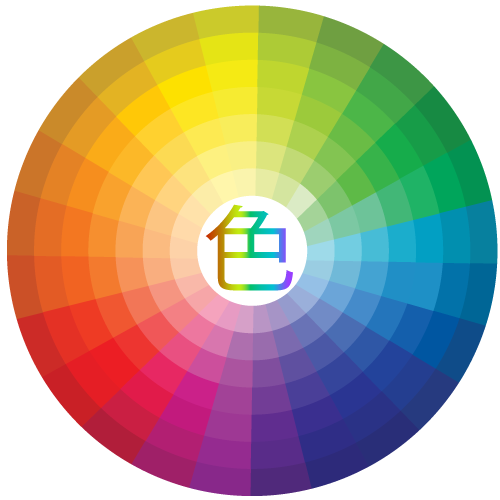 This character means “red”, and is pronounced あか or “aka”.

The word for “baby” is 赤ちゃん (あかちゃん; akachan), which is a bit like “red cutie”. This makes sense as newborn babies are often very red!

Another word that uses the alternate character (紅）is 口紅 (くちべに；kuchibeni), meaning “lipstick”. The characters are (mouth + red), which makes sense for the word “lipstick”. You might have noticed that the pronunciation for this character in this word is べに (beni), instead of こう（kou), like how it’s pronounced in “black tea” or こうちゃ. This is because– Japan.

This word means “orange”, and is pronounced オレンジいろ or “orenjiiro”.

The kanji at the end of this word is the character for “color” and is pronounced いろ (iro). Did you notice that 赤 (red) doesn’t use 色 at the end, but オレンジ色 does? This is because the word for orange color is more like “the color of orange” or “orange color” and not just the word “orange”. You don’t necessarily need to say 色 (いろ； iro) at the end, and could just say オレンジ (orenji), however it’s more common to use オレンジ色 instead of just オレンジ.

Just like with most characters, they have an alternate reading depending on what word it’s used in. 色 can be pronounced いろ (iro), but can also be pronounced しょく (shoku).

An example of a word using the “shoku” reading is: 原色 (げんしょく； genshoku) or “primary color”. This is made of the characters (original; primary + color).

This word means “yellow”, and is pronounced きいろ or “kiiro”.

It’s pretty straight forward with this one. It’s made up of the characters (yellow + color). You might be wondering why the word for “red” was listed as 赤, and not 赤色 like how yellow uses 色 at the end.

You could say 赤色（あかいろ；akairo), using 色 at the end as it’s a valid word, but just 赤 is more common than 赤色.

The reason behind this is because 赤 (あか；aka) isn’t ambigious sounding and it’s clear what word you’re saying, where 黄 (き；ki) is ambigious. Are you saying 木 (き；ki) or “tree”？気 (き；ki) or “spirit”？ Adding 色 to the end makes it clear you’re saying the color “yellow”.

Some common words that use the character 黄 (yellow) are 黄身（きみ；kimi) meaning “egg yolk”. Another is 黄金 (おうごん；ougon), meaning “gold”, made from the characters (yellow + metal). Again you might notice that in the word “gold”, the character for “yellow” is pronounced おう, and not き, because again, Japan. In all seriousness there’s a reason for this, which is due to alternate readings or “onyomi” and “kunyomi”, which is a topic for another post.

This character means “green”, and is pronounced みどり or “midori”.

You might be familiar with a somewhat famous melon flavored liqueur named “midori”, which is the word for “green” in Japanese.

A common Japanese word using this character (besides the color itself) is 緑茶（りょくちゃ；ryokucha), made up from the characters (green + tea), and means just that– green tea. The reading for 緑 in this word is りょく(ryoku), and not みどり (midori) like it is for the color itself.

This character means “blue”, and is pronounced あお or “ao”.

What’s interesting about this character is that sometimes it can also mean “green” instead of “blue”. This is because there used to not be a word for “green” in Japanese, and just “blue / green”.

Some examples of this that carry over even to today, are 青信号（あおしんごう；aoshingou), or “green light”, as in a traffic light, and is made up from the words (blue + traffic signal).

Another is 青葉（あおば；aoba), made up from the characters (blue + leaf), which means “fresh leaf / leaves”. This only makes sense if you know that the word for both blue and green used to be 青！

This character means “purple”, and is pronounced むらさき or “murasaki”.

Japan’s first novel (The tale of Genji or 源氏物語) was printed in the 11th century and was written by Murasaki Shikibu, or 紫式部, though that was her pen name and her real name isn’t actually known.

This character means “black”, and is pronounced くろ or “kuro”.

The original form of this character (the ancient form) was representing a blazing fire under a rock, which accumulates soot (煤）which is of course black.

Here’s a graphic representing how it evolved into it’s current form:

Some common words that use this character are 白黒（しろくろ；shirokuro) or “black and white” made from the characters (white + black). The order is backwards from how we say this in English. Another word is 黒板（こくばん；kokuban), which means “blackboard” and is made from the characters (black + board). Notice the reading for “black” in this word is こく or “koku” and not “kuro” like in the color itself or 白黒.

This character means “white”, and is pronounced しろ or “shiro”.

Some words that use 白 are 面白い（おもしろい；omoshiroi) or “interesting”, 白鳥（はくちょう；hakuchou) or “swan”, and 白髪（しらが；shiraga) meaning “white hair”. Notice that it can also be prounounced はく, and in the last one しら, which is more of an exception.

This word means “grey”, and is pronounced はいいろ or “haiiro”.

This is also straight forward– the first character (灰）means “ash”, and the second character（色）means “color”, so in other words “ash color”, or grey!

You can also say グレー (guree) for grey, using the katakana version and is a loanword from the English word “grey”.

This word means “brown”, and is pronounced ちゃいろ or “chairo”.

Just like the previous color, this is straight forward. The first character（茶）means “tea”, and the second character（色）means “color”, so the color of brown tea leaves (black tea). This makes sense, but is confusing since 紅茶 (red + tea) means “black tea”, and uses the concept of “red” instead of “brown”. Also 茶 alone likely means green tea if not specified…

To wrap this up, here’s a quick little tid bit on how to specify if it’s a light or dark version of a certain color.

The make a color lighter, you can add the character 薄（うす；usu) in front, or the adjective form 薄い. Easy!

To make a color darker, you can add the character 濃 (こ；ko), or the adjective form 濃い. Just as easy!

Or check out more Japanese posts at:
https://blog.skritter.com/category/japanese/