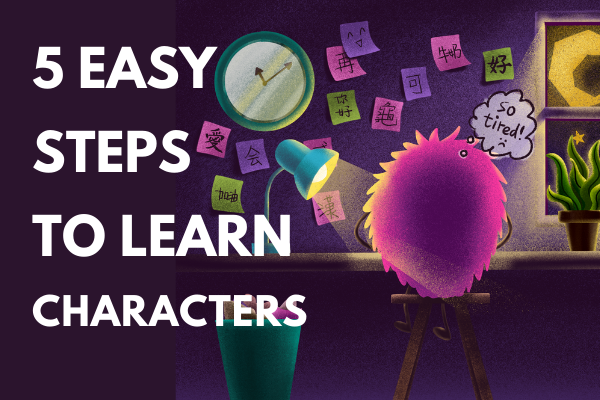 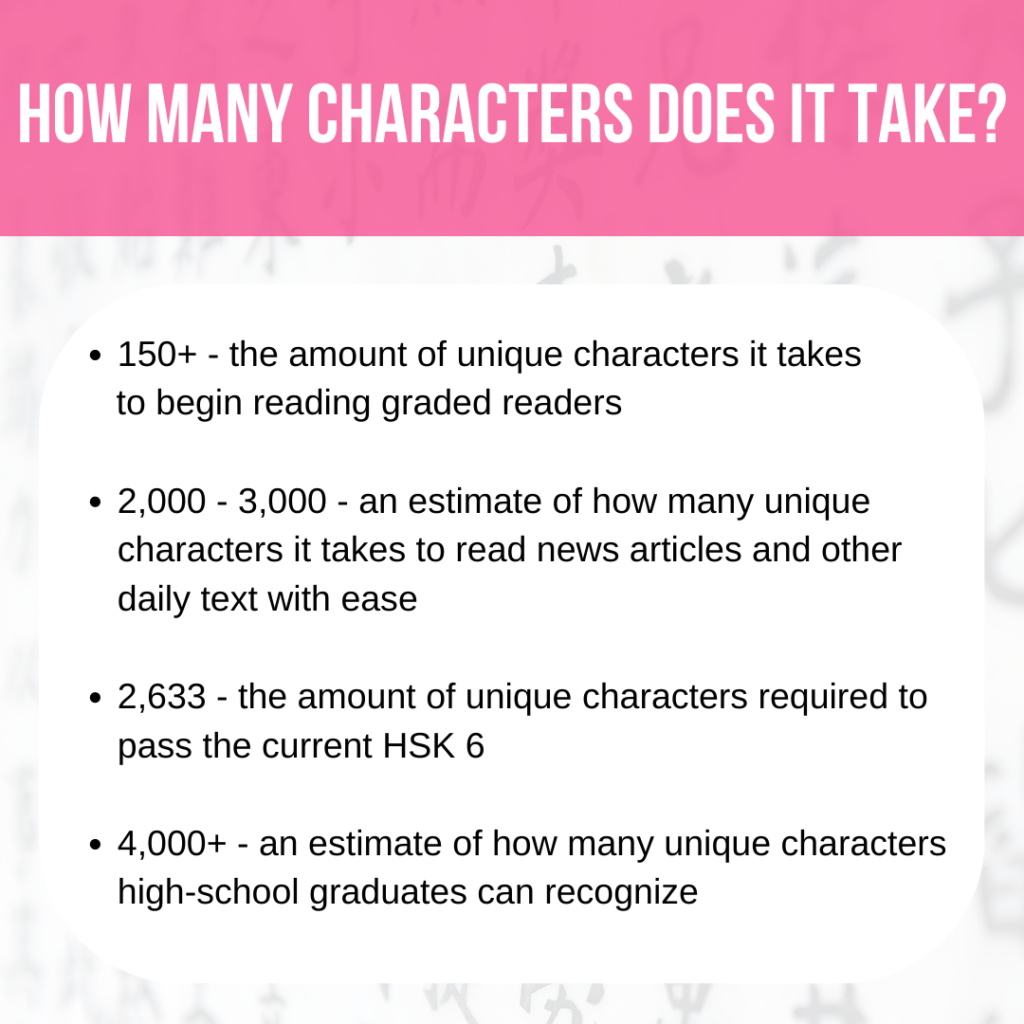 While these estimations may not refer specifically to writing, practicing writing can help you to better recognize and understand the system behind Chinese characters.

As many of you probably already know, there are two sets of Chinese characters: simplified and traditional. As the names imply, the former is a simplification of the latter. Character simplification was promoted in Mainland China from the 1950s and onwards, which explains why the traditional characters are still in use in many other places, including Taiwan, Hong Kong and many overseas communities. Choosing which to learn is a personal choose that may be influenced by your reasons for learning the language. To learn more about the traditional and simplified characters, read this.

How are Chinese Characters Written?

In order to systematically learn characters, it is important to learn the stroke order. Chinese characters are written with a number of distinct strokes, and when writing characters, there is generally a fixed order in which these strokes are written. Following this order makes characters easier both to learn and write! 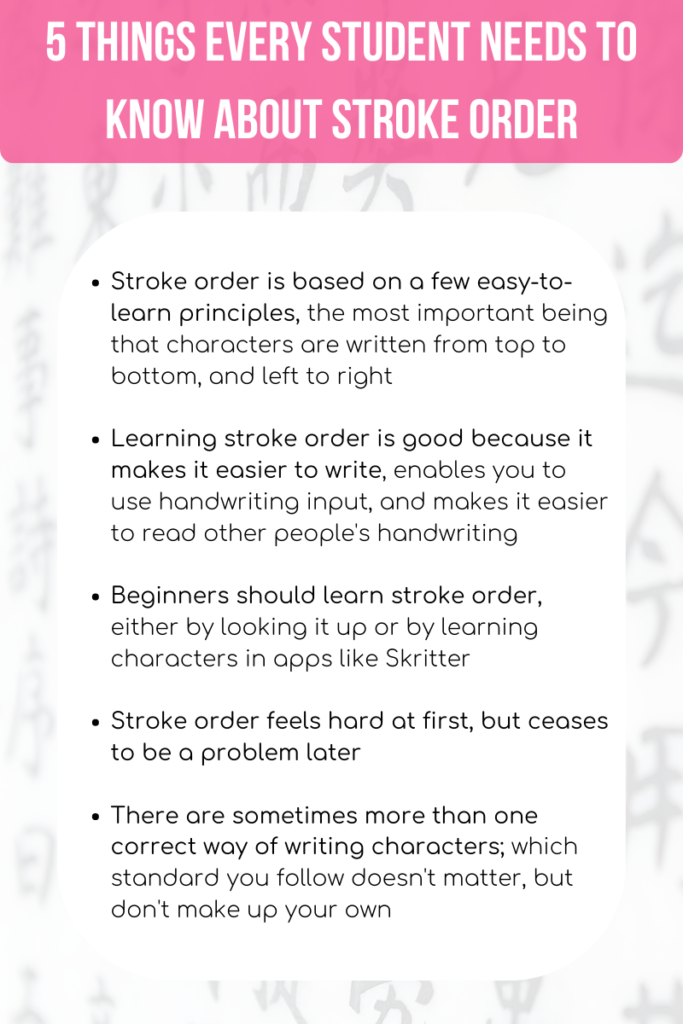 Check out The Ultimate Guide to Chinese Character Stroke Order to learn more about stroke order.  Learning the proper stroke order rules will help you in your journey to learn how to write Chinese characters.

We have a lot to cover in this article, so let’s take a quick look at components/radicals.  If you want to learn more on this topic, check out the link above.

It’s common for beginners and sometimes even more advanced students to lack an understanding of how Chinese characters are structured. This includes misconceptions about components and radicals.

Each Chinese character has one and only one radical, which dictionaries use to sort the character into the right section. The exact number of radicals varies. In the most recent edition of 现代汉语词典, there are 201. Another standard reference for radicals is the Kangxi dictionary published in 1716 which contains 214 radicals. Not all characters are sorted by exactly the same radical in all dictionaries, but most are. Within each section, characters are sorted by the number of additional strokes necessary to write the character, not including the radical.

The Categories of Chinese Characters 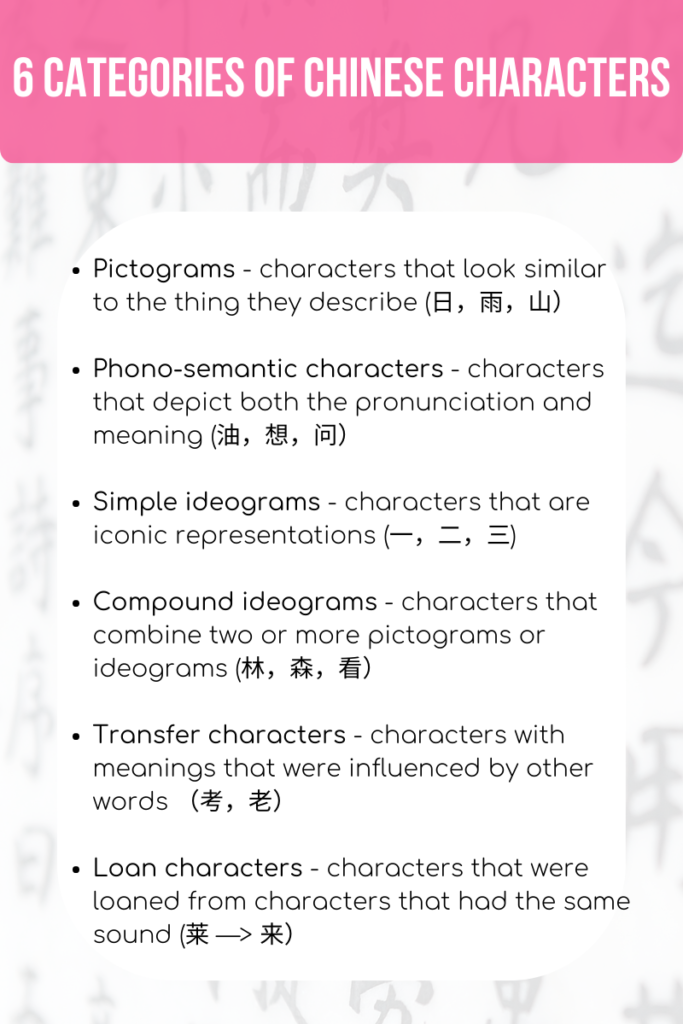 How to Write Chinese Characters: Stroke Order for Beginners

We have covered this topic extensively in The Ultimate Guide to Chinese Character Stroke Order, so here we will just emphasize some important rules to remember. First, if you only take away one thing about stroke order, remember the one rule to rule them all: top left to bottom right. Here are the 8 rules: 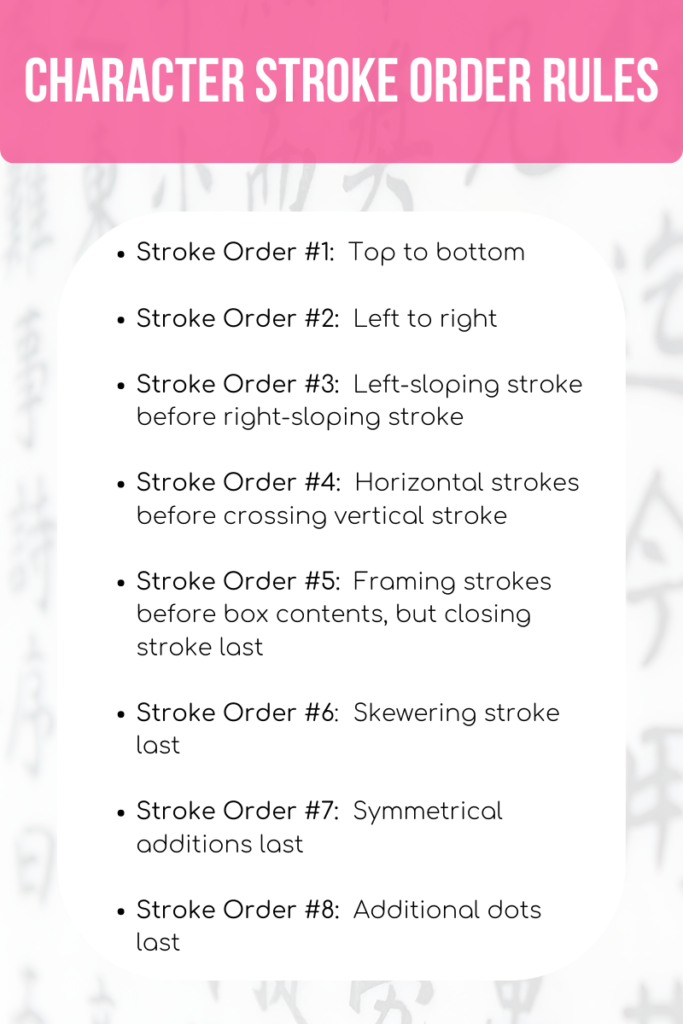 How to Practice Chinese Characters

Now that we have learned a little about Chinese characters, let’s look at how you can practice them.  Even with the help of Skritter, the Heisig method and other online and offline resources, effectively learning Chinese characters is no walk in the park. In my early days of Chinese study, I was very keen on the 抄写[抄寫] (chāoxiě) method; I would spend hours furiously copying characters into study books and onto graph paper hoping that I could “remember” how to write the characters just long enough to get a solid grade on the next 听写 [聽寫] (tīngxiě: dictation quiz). After the quiz, it was back home to rinse, wash, and repeat. 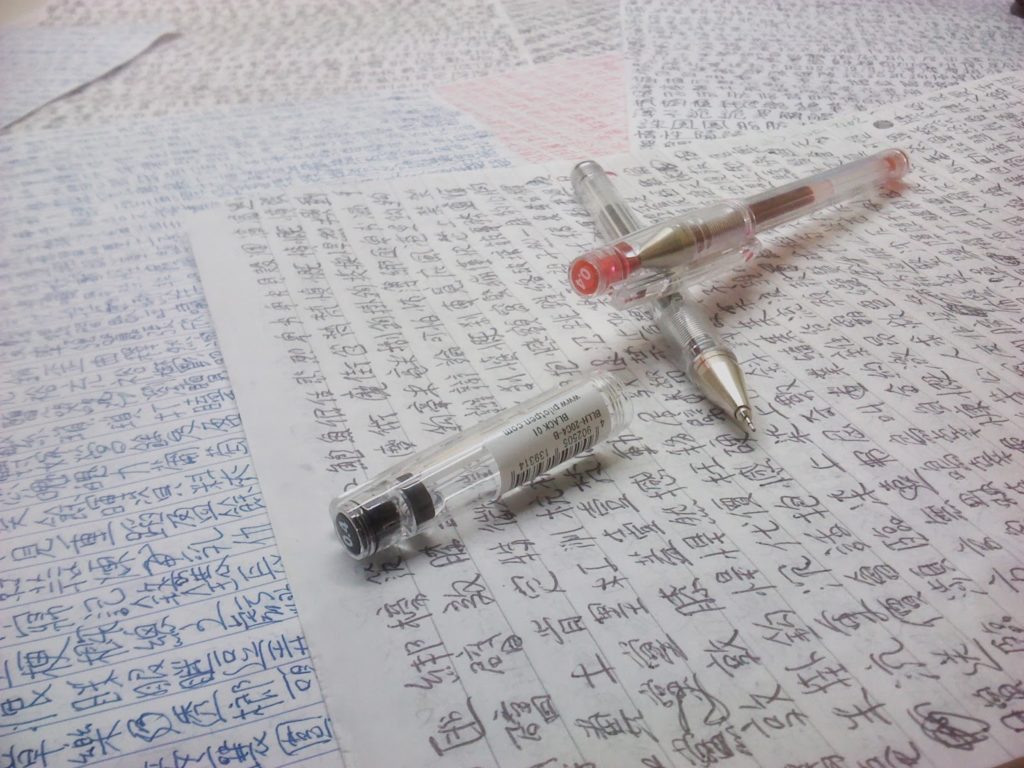 Somehow this strategy worked for the first few years of Chinese. Aside from the daily dictation quizzes, my teachers rarely assigned actual writing homework. When I inevitably forgot how to write a particular character by hand (usually a few days after my dictation exam) I was content with looking it up in my dictionary. Surely there was a better way to learn characters in less time and with a higher retention rate.

So, what can one do to really learn how to write Chinese characters effectively? During the summer of 2011 in Beijing, China I found a strategy that would not only improve my overall retention rate but also reduce the time I spent learning Chinese characters on any given day. It appeared in our textbook as a 口号[口號] (kǒuhào: slogan), which has stuck with me ever since. In this article, I will break down the slogan into individual parts, and provide an example or two about how it works.

看 (Read): The first step to effectively learn and remember characters is to actually look at the character. So simple, right? While this step is fairly straightforward, the goal should be to go beyond a quick, often unconscious glance. Rather, we should be aware and conscious of the new character before us.

拆 (Analyze): The second step involves 拆开[拆開] (chāikāi: separation), or the analysis of this new character. During the process, one should think back on what they’ve learned about 部首 (bùshǒu: radicals) and 部件 (bùjiàn: components) and see if you can’t identify them in this new character. Don’t know the radical or a component element? Skritter is great in providing this information, but apps like Pleco and websites like MDBG will also give you similar character decompositions.

写[寫] (Write): Now that you’ve taken the time to consciously look at and analyze the new character, it is time to write it. During the third step in the process of learning a new character, it is important to go beyond the number of strokes and stay aware of the components found within the character. It helps to hide the original character from your view as well (if you can)… to help overall memory retention. In addition to writing the character, I also find that saying the individual components of the character as I’m writing them really helps keep me aware of them and also helps solidify a more conscious study process.

比 (Compare): Now that you’ve reached step four it is time to step back from your work, and 比较 [比較] (bǐjiào: compare) what you’ve written with the original character. Do they look similar, is your stroke order correct? If not, make the necessary adjustments and try again. If they look the same, then proceed to step five!

记[記] (Memorize): The final step is about actually committing the character to memory. So how do you do it? Mnemonics, or other memory retention techniques like storytelling help aid in the memorization process.

If you are seeing a character on Skritter for the first time then check out mnemonics that other users have submitted for a bit of inspiration. Keep in mind, however, that coming up with your own story or mnemonic is probably going to yield the best results over the long-run. I’ve found that the crazier the mnemonic the better it sticks.

Let’s look at the 5 steps one more time:

I used to teach this method to all of my students during our first few weeks of class and would get some pretty amazing results. No matter if you are using Skritter or other study methods to learn Chinese, I think the most important thing is to work on developing a more conscious and active approach to learning characters.

On Skritter, you can learn how to write Chinese characters.  In addition you can learn the proper stroke order and tones.  The best part is, our SRS system will help you remember the things you have learned by making sure you are exposed to the information at the right times!  Use the code INKREN10 on the website to save 10% on your first purchase.