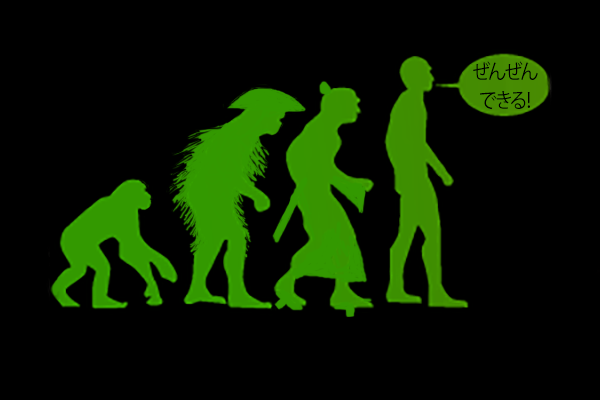 All living languages are evolving, and it’s likely accelerating as the world grows. Languages often adopt words from other languages, maybe a “mistake” is used so much it starts to become acceptable use, certain expressions become every day occurrences, some words become out of date and eventually archaic, grammar changes over time or becomes out of use, etc. The more outside influence a culture has with the rest of the world, the more the culture’s language could be influenced by it as an inevitable byproduct. With Japanese, observing the way the language has changed over time can be like a history lesson, where some changes are linked to specific events.

It’s strange to think the Japanese you’re learning today isn’t the Japanese you would have learned 100 years ago, or that if you took a time machine back to ancient Japan, you wouldn’t really be speaking the same language.  With that said, the English language today isn’t the same as the English 100 years ago, not exactly. The changes are more noticeable the farther back you compare, so much to the point “English” can’t even be read by a modern English speaker. All languages are constantly changing, and some changes are even noticeable in just the past couple of decades.

Let’s take a look at how Japanese is changing–unfortunately since microphones didn’t exist since ancient times, we can’t hear what it sounded like until up to a certain point, and the origin of Japanese isn’t fully known or at least accepted, but we can start with when Chinese characters were adopted.

This post is somewhat related to “A brief history of the Japanese writing system“. If you haven’t read that you should check it out! 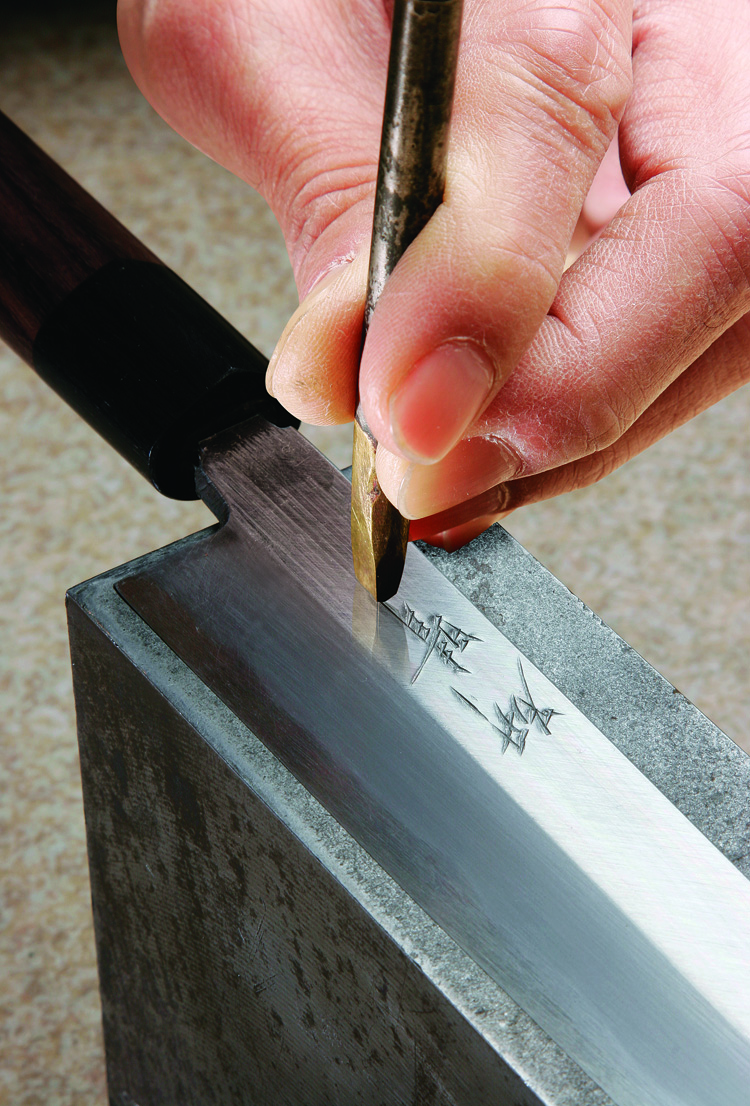 Before the 5th or 6th centuries, Japan didn’t have a writing system, (or at least there’s no evidence of this)! The first documented evidence was around the 5th and 6th centuries, where proper names were inscribed on things like swords.

The earliest and most widely known record of old Japanese writing is the 古事記 (Kojiki), meaning “Record of Ancient Matters”, which was written in the early 8th century before kana was invented. Japanese writing at this point consisted of entirely Chinese characters and using the kanbun method to read them– the Kojiki uses a lot of Chinese syntax since writing started off as traditional Chinese, but also used character combinations that would only exist in Japanese. A second more comprehensive book was then written called the Nihon Shoki, or “Chronicles of Japan”, which go over things like the origin of the world and the first seven generations of divine beings. You know, light reading.

Later on during the end of the 8th century, other famous writings like the 万葉集 (Manyoshu) were written which was a collection of poems consisting of entirely Chinese characters, however they started to be used for their phonetic value, representing the sound of Japanese. 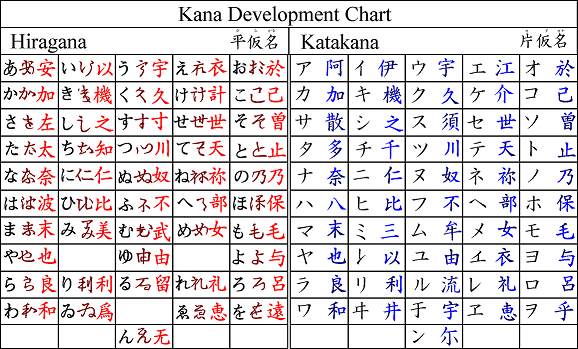 Back on the subject of what Japanese sounded like, let’s think about how many vowel phonemes (how many “vowel” building blocks) exist in Japanese. There’s currently 5 of them, which are A, I, U, E, and O. In other words taking a sound represented by the letter “K” in front of an English vowel to represent the Japanese sound, you can make, ka ki ku ke and ko, and it works. In the 8th century when the Manyoshu was written, a man named Dr. Shinkichi Hashimoto discovered there were 8 vowel phonemes used, three more than what’s used today, so Old Japanese also used the phonemes ï, ë, and ö, in addition to the five vowels of modern Japanese. As another example of change, when kana was invented there were characters for the sounds “we” or “wi”, written in hiragana as ゑ and ゐ, and in katakana as ヱ and ヰ.

With all of that said and out of the way, here’s an example from the 万葉集 (Manyoshu),  showing how Old Japanese was used. This would have been written some time around 760 AD.

English translation of Japanese translation: The wind through the mountains blows continuously, and so night after night by myself, I think of my wife at home.

English interpretation: Wind blows through the mountain every night, thinking of my darling at home, I cannot sleep.

Comparing the original original text to how it would be transcribed using modern Japanese characters today, you can see how some things work. For instance 乃 (which isn’t used in Japanese anymore), was used to represent the particle の, however there wasn’t kana when this was written and 乃 was used.  Instead of 山越の風, it was written as 山越乃風. The same goes for 乎, in this case it’s being used to represent the particle を since that kana didn’t exist yet. You can see how this might be harder to read than modern Japanese, since some characters like 山, 越, and 風 were used to represent both the concept and the sound, but other characters were used purely to depict the sound and ditch the meaning of the character. Moving along in the poem, 時自見, meaning “all the time”, would be written today as 時じみ, though the grammar isn’t modern. Since there weren’t kana to use to write じみ, they used 自 and 見 in the text instead, which are both pronounced じ and み respectively. The meaning of the two kanji themselves aren’t considered in this specific case, instead they were purely used for the sounds they represent. Luckily with the invention of kana that was sorted out.

The addition of onyomi (音読み）, or “sound reading”, is logically the largest change to the Japanese language, coming directly from importing Chinese characters. This didn’t happen with the snap of the fingers, it likely took a great deal of time to develop and start affecting how everyday people speak, but it did change the way the language is spoken entirely.

Though not a completely accurate description, it could be thought of this way: before Chinese characters were imported, the Japanese language would have been 100% kunyomi (訓読み） and have 0% onyomi (音読み）, since at that point all of the words used in the language were created in Japan without the influence of Chinese. The reason why this description isn’t entirely accurate is because Japan didn’t even have a writing system before the influence of Chinese, and so the term 訓読み wouldn’t have existed. However in today’s terms it could be thought of like that, where any words you learn that are kunyomi could have existed before the point where Chinese characters came into the equation. The real term for any words that existed before Chinese characters is 大和言葉 (yamatokotoba), which are just that– words that existed before the language started drastically changing. There’s a blog about that here, if you haven’t read it.

This is pretty crazy to think about, when you stop to think how many words you know only exist from the adoption of Chinese characters. There’s no rule set in stone for when a word is read as kunyomi versus onyomi, but it can be very generally described this way:

In a nutshell, anything read in kunyomi is the native Japanese pronunciation, and anything read in onyomi is the borrowed Chinese sound. It should be noted that onyomi has been used for so long it’s not like it’s actually Chinese, it’s just as native Japanese as anything else, but the origin of these readings did come from the original Chinese sounds. Since Japanese doesn’t have as many sounds as Chinese, a lot of them were converted to the closest equivalent sound in Japanese, which is why they don’t completely match entirely– plus this was also about 1,000 years ago, so the Chinese sounds that the onyomi readings come from aren’t necessarily the same as they are spoken in China today, which is another reason they can be completely different from the current Chinese pronunciation.

Using the words above, let’s compare the onyomi readings to how they would be currently pronounced in Chinese.

As you can see there are a lot of cases where words in Japanese are written the same and even pronounced similarly to the Chinese counter part, in cases where those words were adopted into Japanese and remain the same in Chinese to this day. It’s hard to track down a precise percentage of what average Japanese today uses onyomi sounds, it’s really most nouns– almost every character does of course have a kunyomi and usually one or multiple onyomi readings which would lend to half of the language, however that’s just considering how many characters have onyomi readings and not the ratio of spoken language, and there are some kanji that only have kunyomi readings since they were invented in Japan.

Let’s take a look at some things that have recently changed. Most of these examples are expressions or words that have come into common use, where they haven’t really been used in the past or would have been considered an odd or incorrect usage.  On the subject of change and learning languages, an interesting consideration is since Japanese, like all languages, is constantly changing but textbooks and dictionaries often repeat the same material, it’s possible to find definitions or rules that might not fully apply today, or maybe even incomplete information, like if a word belongs to a specific dialect for instance. (A good reason to make sure you know how the word is actually used before using it)! Eventually these entries must be revised or improved, but they can linger around. Most (Japanese) people seem to be aware that the English they typically learn in school is a school-version, where they memorize sentences or expressions that native speakers might not use the most often, which is why there’s the term “生きた英語”, or “living English”, or in other words the English that people who speak English use. This is why it’s important to study a language as it’s actually used and not always trust your textbook completely. It’s very important to put just as much emphasis on speaking and listening through the “living” language, as reading and writing.

Okay side rant over, here are some examples: