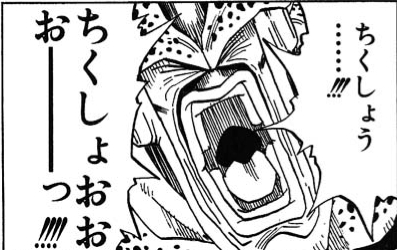 There are some bad words that cannot be included in a blog post of course, so with that said, these words and expressions are rude but not bleep-able. There aren’t really any Japanese swears exactly, however these are close.

Here are some phrases that probably shouldn’t be used very often, (at least if you don’t want to be rude or sound like a manga character)! There are appropriate times to use a few of these without being “rude” necessarily, but it of course depends on the situation.

（しるもんか）・（しるか）
If this were to be said more politely, it would be something along the lines of ”知るものですか”, translating literally to “Is that something to be known?”, close to the English phrase “Is that a fact?”.  When someone says this, it can be considered equivalent to “How should I know?” or “Who cares?”.  It could also be said less slurred as “知るものか”, or said shorter as “知るか”, or maybe “知るかよ” meaning, “heck if I know”.

「知るかバカ！そんなことより お仕事だ！]:  Who cares moron! Work is more important than that!

This is along the lines of “who cares” or “whatever”, and literally translates to “anyway is fine” or “however is good”, meaning you really don’t care. It can be used in defeat or rudely.

「もうどうでもいいや…. 送別会なんかしたくない」: Whatever already… I don’t even want to go to the farewell party.

I suspect most of you reading this already know this one, but it has to be included in the list. An interesting thing about ばか versus アホ (the next word in the list), is that depending on where you are in Japan, one or the other is a lot more rude. You probably shouldn’t use either one, but ばか is said a lot more freely in some parts and not considered as rude where アホ is, and in other parts アホ is used more freely and ばか is more of an insult. (For those who don’t know the definition, “ばか” means “stupid”). バカヤロウ is also a common insult heard to call someone.

アホ
Much like “ばか”, this translates to something like “fool” or “idiot”. As mentioned earlier it’s used somewhat freely in some parts, where in other parts it’s considered more insulting.

ブス
Translating to “ugly”, this one might be used a little stronger than ugly is in English.

This one means “fat”, but more on the chubby side. Another word for fat is “太った”.

「…君は デブは嫌いかね？…」: You like fatties?
(lit: You hate fatties?)
どけ
This is the imperative form of the verb 退く meaning to “step aside”, and is meant as “Get out of my way!”, this is pretty much only rude.

お前
（おまえ）
This pronoun for “you” is often used by between male friends instead of “あなた” and isn’t rude (if you’re friends), however can be used in a rude way as well.

Abiding by こそあど (the ko-so-a-do demonstratives, like これ・それ・あれ・どれ), this is another colloquial or derogatory pronoun for “you”, which can be used in a “joking” way and not necessarily meant to be rude. The root is “やつ”, translating to something like “guy” instead of “that guy” or “this guy”. Since it follows こそあど, as you might suspect you could say “どいつ”, meaning “which guy”, to which the answer should always be: “あのドイツ人”. (Very bad Japanese joke). As long as I’m rambling, there are other 駄洒落 (だじゃれ； puns) or really 親父ギャグ (おやじギャグ； boring pun) along the same lines like: “オランダ人はおらんだ“,  or ”イタリア人がそこにいたりあ！” …. 妻のダジャレはつまんね～

「オイ オイ オイ」: Oi Oi Oi!
「死ぬわ アイツ」: That guy is gonna die.
手前
（てめぇ）
Unlike あいつ, this is likely only meant to be rude, and is another derogatory pronoun translating to “you”, meant to show disdain and often heard in anime/manga.

「誰だよ てめーは」: Who do you think you are?
「いきなり現れて好き勝手言ってんじゃねーぞ」: You can’t just show up and say whatever you want.

貴様
（きさま）
Yet another “you” pronoun of contempt, this one too is likely to be heard in anime/manga, and is considered an archaic word.

～め
This is a derogatory suffix which gets it’s reading from 目. It can be attached to the end of something to show your contempt, like “犬め”, which is sort of like “scoundrel dog” or “blasted dog”. Another word further in the list uses め as a suffix: 畜生め.

Used by tough guys who are trying to pick a fight, this translates to “do you have a complaint?”, or “do you have something to say?”, sort of like “got a problem?”, and is pretty much used exactly the way that sounds.

“死ね” is the imperative form of the verb “死ぬ”, meaning this is a command ordering someone to die. To follow the anime/manga theme example, this could be said by someone during the initiation of their attack in a fight scene.  Other phrases related to this are “死ねばいいのに”, or “早く死ねばいいのに” or maybe “死ねばいいと思うよ”, translating to “I think it would be good if you were to die”.  This is certainly not something that should ever be said, however is not extremely uncommon to be heard or read at any rate.  Not the most mature way to insult someone, but it should do the trick!

煩い
（うるさい）
An adjective meaning “noisy”, うるさい is often used in place of “shut up”. Again though, it can be used to describe something is noisy or annoying. For extra rudeness it can be slurred as “うっさい”, or “うざい”. It’s also common (for roughians) to say it as “うるせぇ”, which applies to a lot of other words, like “めんどうくさい” (troublesome) as “めんどうくせぇ”, or “つまらない” (boring) as “つまらねぇ”. To use an example from earlier, “おまえ” (you) can be heard as “おめぇ”.

黙れ
(だまれ)
This is like the “stronger version” of うるさい, and is the imperative version of the verb 黙る (to be silent), commanding someone to shut their face. Another form could be “黙ってよ！”.

ふざけんな
Stemming from the verb “ふざける” meaning to “joke around” or “mess around”, this is actually used much more seriously than that sounds, and is slurred from “ふざけるな”, meaning “Don’t mess around”.

I tried to avoid using the words “damn it” to keep the wording here as polite as possible yet still convey the point, but “darn it” just doesn’t cut it. This is used in both anger and defeat. It can be used as an insult towards someone else, by added the derogatory suffix “め” mentioned earlier, thus becoming “畜生め”.

糞
（くそ）
This literally translates to “poop”, but can be used as an expression close to “damn!”. It can also be added to the beginning of words like “くそガキ” (stupid brat!), or “くそばばあ” (old hag!). It’s also used as a suffix in the next item in the list as well: “下手くそ”.

下手糞
（へたくそ）
The word “下手” by itself translates to unskillful or awkward, and “くそ” was explained in the previous item. The combination of the two means extreme clumsiness, and can be used as an insult translating to something like “You’re hopeless!” or “Give it up!”.

ださい
Like the opposite of 格好いい, and sometimes spelled as ダサい, this translates to “uncool” or “lame”. It could be used to describe somebody them self for instance, or perhaps their sense of style. As mentioned earlier on another word, this one too can often be slurred as “だせぇ” for added emphasis.