And last but not least, the making of lists. This is something else we tested thoroughly, and found the process had a big tendency to confuse people. So we brainstormed a whole mess of things to try and help guide people, and we implemented just about all of them. 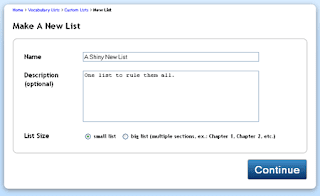 The first thing we did was introduce a new kind of list: a single section list. We noticed lots of the lists people were making were single section anyway, so we decided to optimize for them. And it gives us a chance right on list creation to introduce new users to the concept of sections, and what they’re supposed to do. 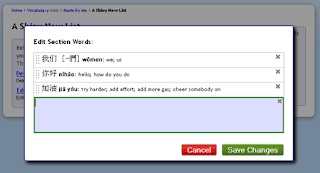 Then when it’s time to add words and sections, helpful info bubbles point out the next step each part of the way. They show up only when the user is starting out or while the list is incomplete. We may use these more in other parts of the site as well, like on the practice page to point out bits and pieces of it to new users as they go along. There’s so much crammed into this site at this point, it’s a challenge to keep it all neat and organized and possible to find! 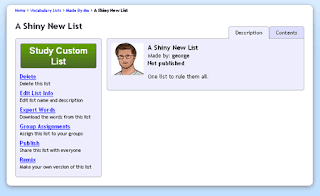 The list editor itself has also undergone a number of changes. Labels, info bubbles, changes large and small to how words are entered and shown all work to make this very powerful tool more understandable from the get go.

Well that’s the last post for the latest round of changes to the site. Thanks again to all the alpha users who tested and found a whole mess of bugs before we released to the general public, and helped us change our minds on a few things and made the result that much better. We are still changing and tweaking things because of your input, so thanks for helping us out!