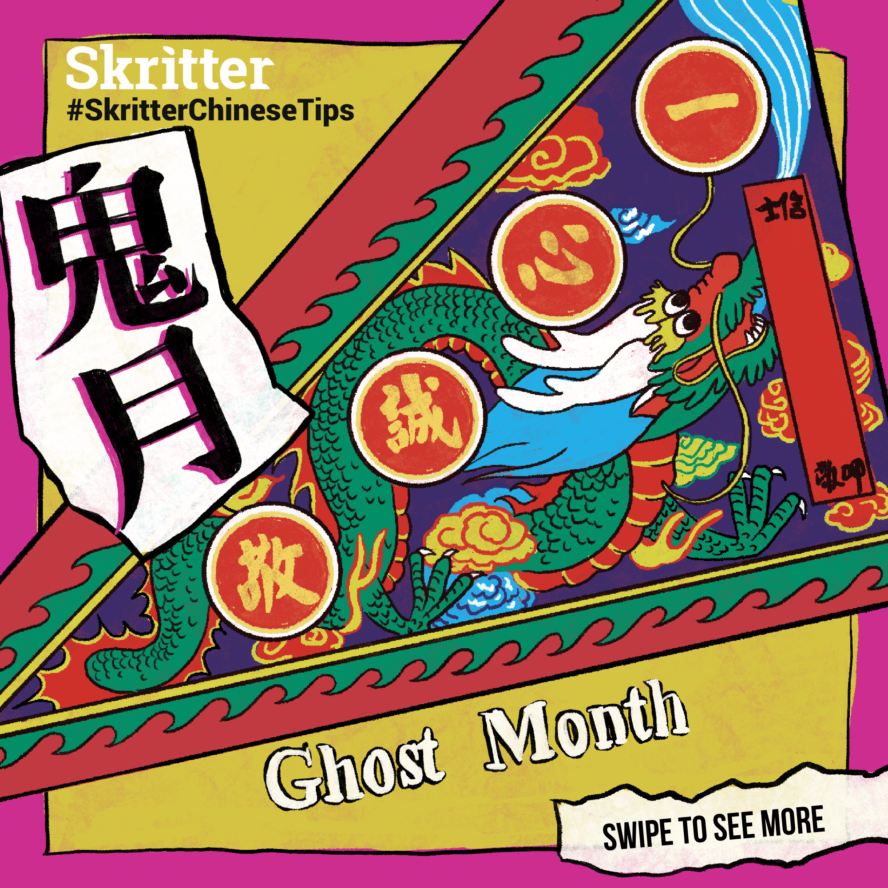 On the southern coast of China and in Taiwan, the first day of the seventh month of the lunar calendar is the day when the ghost door opens. According to folktales and common beliefs, the guardians of the underworld open the gates of hell and return thousands of ghosts into the world. It’s like a holiday for them!

The posthumous world in Buddhism and the West is known as “地狱.” In Taoism and Chinese culture, “阴间” is used which means “the underworld”, and the realm of the living is known as 阳间 yáng jiān – “the sun place”.

(Hungry) Ghost Festival falls on the 15th of the seventh lunar month. On this day, each family prepares offerings for their deceased family members who return to the “sun realm” for the month, as well as offerings for the starving ghosts who have no one. After the ghosts have had their fill, the living take the food home to eat.

Because there are too many hungry ghosts who are not worshipped during the month, people will hold a special 普渡 pǔdù ceremony and pray that they will not cause chaos during this time because of their hunger.

Chinese tradition dictates that after your loved ones die, one must burn paper money and present rice, meat, and vegetables as offerings. If no family member provides offerings, they will become “lonely ghosts”, with neither money nor food.

The so-called pǔdù offerings must be done outside. The food must be cooked and uncut, such as a whole chicken, pig, or fish. Nowadays, cookies, candy, instant noodles, and cans of drink are used instead for convenience. Most people are in good spirits during Zhōng yúan jié because you’re obliged to buy junk food.

There are many taboos during Ghost month. The common ones are: not going into water, not drying clothes at night, avoiding getting married, buying a house, taking the last train home, and not talking about ghosts. Locals will get annoyed by whistling, patting someone on the shoulder, or sticking chopsticks upright in a bowl of rice, (as it looks like prayer incense for the ghosts).

As mentioned earlier, you shouldn’t discuss ghosts during Ghost month, otherwise the ghosts will think you are calling to them, so we refer to them as 好兄弟 (good brothers) to show friendship.