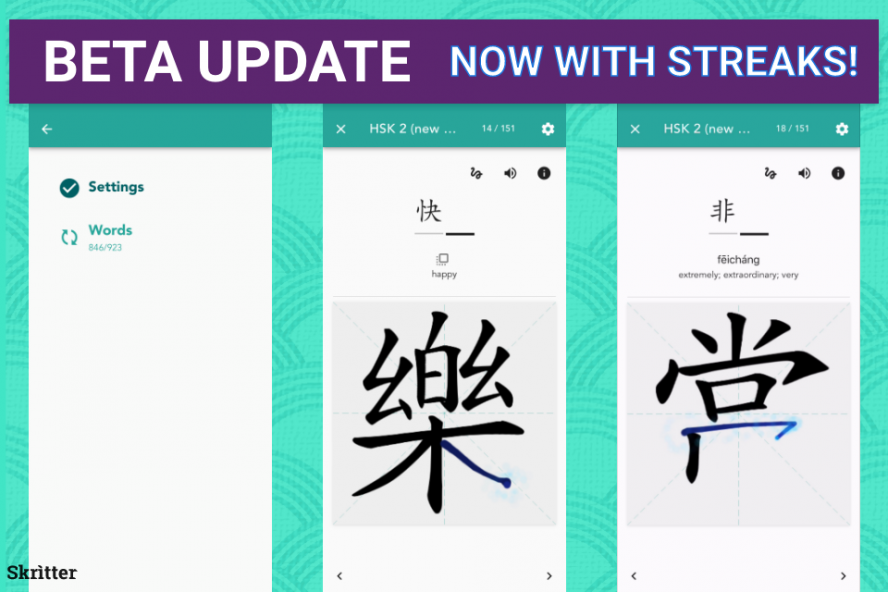 Summer is in full swing in the Northern Hemisphere, and we’ve been putting these endless summer days to good use working on and testing the latest Skritter: Write Chinese and Skritter: Write Japanese mobile beta updates!

New things to look for in the beta!

The main focus of this update was to reduce Home screen loading times, both when entering the application, and also when returning from a Review activity or inside of a deck. Once we wrapped that up, however, we decided to take things a bit further and continue improving deck loading in general. Moving forward, decks don’t need to be reloaded every time you close and open the application… they’re just on the app, and ready to be studied from at will!

In addition to these performance updates, we’ve also included a new canvas experience that we’ve been working on for a while, and now it is ready for all of you to check out and test! The “hi-fi writing” experience brings an ink-like feel to the canvas and also includes writing streak effects for Test and Review activities.

In addition to these significant updates, we’ve also made lots of general bug fixes and improvements along the way, including:

Stuff we’re working on next!

In addition to general bug fixes and improvements based on your feedback, here are the things we’re looking forward to working on next:

As always, thanks for your continued support and encouragement during the beta process. Happy studying, and we look forward to your feedback!

Thanks!
-The Skritter Team

Not a beta tester yet? Join us today!