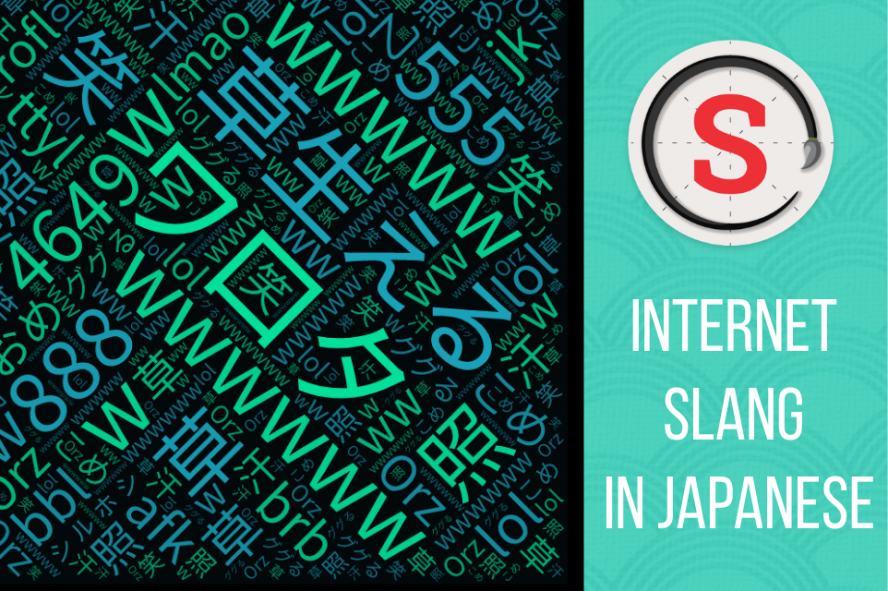 Japanese is filled with internet-related slang just like how English is. If you use the internet a lot (as I’m guessing you do, since you’re reading this), you’ve probably picked up a lot of slang.
Brb, bbl, ttyl, afk, jk, lol, lmao, rofl, afaik, iirc, rtfm, etc.

Japanese has different types of speech, 話し言葉 (はなしことば）or “words you speak” and 書き言葉 (かきことば), or “words you write”, meaning there are some words that are generally used in written text and might not be used in everyday speech.

As a note about written language versus spoken language– as people type more and more and write less and less, it’s more common for the way people speak to show up in the way they type. してる instead of している, とゆう instead of という– things like that. In other words, spoken language (口語 or こうご) is becoming more common in writing as the internet is used more.

This post focuses on slang you’ll encounter on the internet, however, I wrote another post on more general slang in Japanese over here: すげぇ！ Slang in Japanese

Let’s go over some Japanese internet slang so you recognize them!

This is used just like “lol” in English. There’s a couple reasons why ｗ is used– w is the first key you need to press on your keyboard to type 笑う (わらう) or “to laugh”. It also looks like the sound line of laughter, rising and falling. The funnier something is, the more ｗs you can add, sort of like how you can say “lololol”.

This was used even more when the internet was first becoming popular and is sometimes used with parenthesis like this: （笑）

You might be wondering, why would anyone want a keyboard that sprouts grass when you press w?? Well, w sort of looks like blades of grass, and when you have a bunch of them together, wwwwww, it looks like a lawn. People started saying 草 （くさ）for grass, or 草生える（くさはえる）for “growing grass” to represent all the ws. It’s sort of like “rofl” or “lmao”.

This literally means “I laughed” and is used like “lol”. It started being used on ２ちゃんねる, an extremely popular Japanese forum which is like Reddit. It’s basically 笑った (わらった） or “I laughed”, but changes ら to ろ. I imagine it caught on because it’s silly.

555 is used because of the way it sounds when reading it out loud– ごごご. It’s used just how you would use “Go! Go! Go!” in English, so, for instance, you could use it at the beginning of a counter-strike match, or the beginning of a rocket league round.

Just like the previous example, 888 is used because of the way it sounds. Eight in Japanese is はち, and when words are joined together they often get voiced– for instance 紙 (かみ) is “paper”, and 手紙 (てがみ) is “letter”. Notice how か gets voiced into が in the word, this is a common thing with compound words. The way you can read 888 is ぱちぱちぱち、which is the sound of clapping or applause. If you want to clap a lot, feel free to use as many 8s as you want!

This too is used because of the way it sounds, however it’s a bit more of a stretch. Numbers in Japanese have alternate readings, and so 4649 could be read as よん・ろく・し・く, which sounds a lot like よろしく (yoroshiku), or the word for “pleasure to work with you” or more literally “please treat me favorably”. It’s an expression used a lot when people start working with each other or meet each other.

A lot of people just type OK and don’t type おｋ, but it’s a meme so I thought it should be included. It’s literally just typing OK but with Japanese input, which ends up looking like おｋ. The meme is “日本語でおｋ” meaning “Japanese would be OK”. Someone might say this if someone says something that doesn’t really make any sense. It’s a sarcastic remark basically saying “Could I get that in Japanese?” (even if they were speaking Japanese).

うｐ is sort of like the previous example of おｋ– it’s the way you type “Up” with Japanese input. This means an upload, like a video upload or blog upload for example. Another way to type this is just アップ (short for アップロード) as you’d expect.

This is both an abbreviation and sort of like 555 or 888 because of the way it sounds (though it’s not used repetitively). 乙 means “the latter” and is pronounced おつ — and おつ is short for お疲れ様 (おつかれさま）which is an expression used as “thanks!” with a sense of a job being done. It literally means something like “Ms. / Mr. tired” but in a very polite way.

Orz is a representation of someone 土下座’ing or kneeling on the ground– it can be used when someone is apologizing profusely, or just in utter defeat. The O is the head, the R is the arm and upper back, and the Z is the lower back and kneeling leg.

照 is the kanji for “shine” and is the same kanji used in Teriyaki or 照り焼き. (Teriyaki literally means “Shiny fried”). The verb “to shine” is 照る (てる）, however you can also pull up just the single kanji by typing てる. This is used to show someone is embarrassed and is blushing and is used a lot in manga as well.

This one is a lot like the previous example and is used in a similar way. The kanji for sweat is 汗 (あせ), and can be used to show someone is either embarrassed or in a very nervous situation. It’s also used in manga a lot, too.

This one is particularly fun because it turns a noun (Google or グーグル) into a verb, ググる. Then that verb is treated as any other る verb, so in the example above, it’s ググた. You could even say this politely: ググりました. We do it in English, too, by saying “Googled it” which makes it a verb, but it’s fun that it can become a る verb in Japanese and ends in る anyways. You don’t have to be a dork though, and could say グーグルした or even グーグルで検索した。

KWSK is an acronym based on the sounds in 詳しく (くわしく）or kuwashiku, which means “in detail”. You can see 詳しい or 詳しく used a lot on websites or advertisements which might have a link saying “詳しくはこちら！” or “詳しい情報はこちらをクリック” meaning “For more the details, here” or “Click here for detailed information”. When using “kwsk”, it means “more details! (please)”.