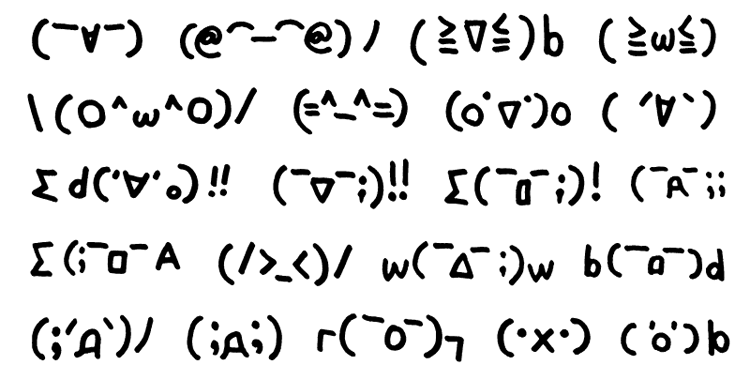 When did the word “emoji” start to be used in place of “smiley faces” in English? I was amazed to hear a non Japanese speaking friend use the word emoji when talking about the graphics while texting on their phone, I asked them if they knew what emoji meant to which their reply was “I don’t know, that’s just what they’re called.” They had no idea it was even a Japanese word! Emoji was originally only available in Japan, but now has been adopted into other countries and thus the term was coined.

Emoji or 絵文字 （えもじ） means “picture letters”, early forms of this started out with text alone as 顔文字 （かおもじ） or “face letters” or Kaomoji. An example of popular American 顔文字 is 🙂 while ^^ is typically used instead in Japan. English speakers are pretty bland when it comes to 顔文字, I would say there is only a short list of commonly used ones. Adding a dash for a nose doesn’t count as an extra!

Beyond that list, I can’t really think of many more that are used.

As you can see, English kaomoji uses mostly colons and slashes with little extra face features and focuses on the facial expression itself, but Japanese kaomoji takes it to another level and treats it more like ascii art, probably because they have so many more symbols and characters to work with. Here are some commonly used ones in Japan, some of these are even built into the Japanese iOS keyboard! (These facial expressions could be used by itself without the head enclosures)

If you really want to go overboard on kaomoji, you can check out: http://www.kaomoji.com/kao/text/, which has so many kaomoji I almost start to not care anymore.

Emoji are built in mobile keyboards as graphics, since they are unicode it is up to the device to render how it is displayed. Here are some emoji: (you can test loading this on different devices to see how it renders differently!)

? guy wearing a mask (if you suspect you’re sick, it’s very common to wear a mask in Japan to not spread germs)
? black cat (there are many versions of these with different facials expressions)
? person bowing deeply (to me it looks like he’s trying to hand you a cheeseburger)
? person with folded hands
? an oni (demon)
? a tengu (type of goblin)
? onigiri
? sushi

If you’ve used emoji before, you may notice a lot of them are Japanese specific since they were first created there. I have my device in Japanese, so it wasn’t odd to me to see them, I assumed it was due to the language setting so it was interesting to see the same emoji on non-Japanese devices as well.

What other kaomoji or emoji have you seen? Leave them in the comments!