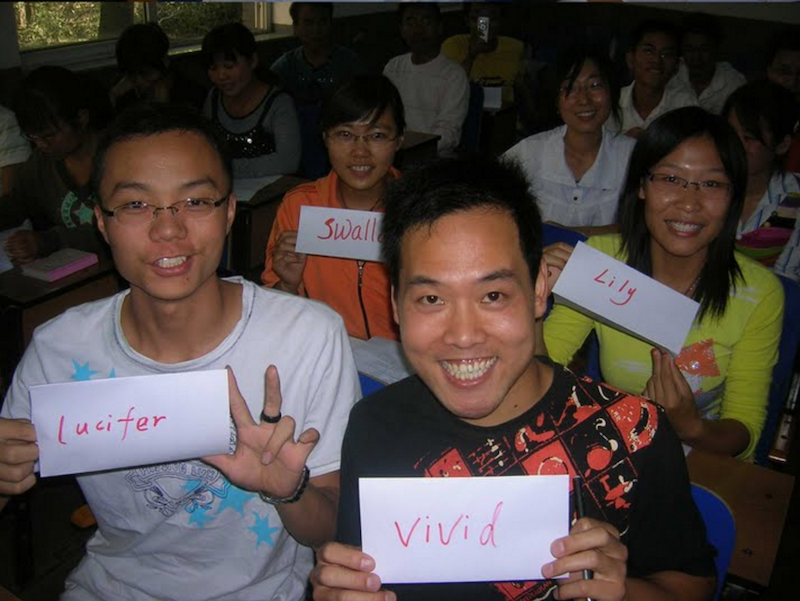 The majority of students who wanted help picking an English name wanted names that were common and sounded similar to their Chinese names. It was a challenge on my part to find the right names to fit the criteria. This year I helped three of my Chinese students choose English names. For 林舒燃 (Lín Shūrán) I settled on “Susan Lin”, for 林必成 (Lín Bìchéng) I chose “Brian Lin”, and for 林晨丽 (Lín Chénlì) I chose “Jenny Lin”. I opted to keep their 姓 (xìng, family name) spelled out in pinyin and base their English first name off of the sounds of their Chinese 名 (míng, first name).

The photos below are of some of my graduate students from Shanxi Agricultural University proudly showing off their new English names. If you click to get a closer look, you’ll see that the namecards read: (top) Ryne, Sunny, Sean, Jarry, (middle) Kobe, Paul, Rain Man, (bottom) Swallow, Lily, Lucifer, Vivid.

I’ve found that the English names Chinese people tend to choose generally fall into these several categories (all of the examples are from students I met in China):

I sat down and had a talk with Jarry and Blandon pointing out that they were not using the most common spelling or pronunciation for their English names. They both stuck with their names because they wanted to be different from the norm and they thought the names sounded better after the change in spelling (Just like Samanfar in the Sexy Beijing video).

If you look at the user comments on youtube about the sexy beijing video, you’ll see that it caused a considerable amount of controversy. Some people said that they thought 苏菲 was being really demeaning and possibly even verging on racist by poking fun at the unusual English names. Personally I think that a lot of Chinese people choose their English names fully aware that the name is a little out of the ordinary. I don’t see a problem with that. If a Chinese person with a strange English name should happen to work abroad or come into frequent contact with English speaking 老外 (lǎowài, foreigners), they could always change their English name later on. Back in High School I chose to be named “Luigi” in Italian class (a shout out to Luigi of Super Mario Brother’s fame). I wasn’t planning to use Luigi in any other context outside of Italian class, and it was fun during that time. I was given my first Chinese name, 芮杰明 (Ruì Jiémíng) by my Chinese professor at Oberlin College, but later decided to change my 姓 after I found out that 芮 is not very common, plus the fact that I couldn’t pronounce Ruì very well during my first year of studying Chinese.

Let me leave you with two anectodes: